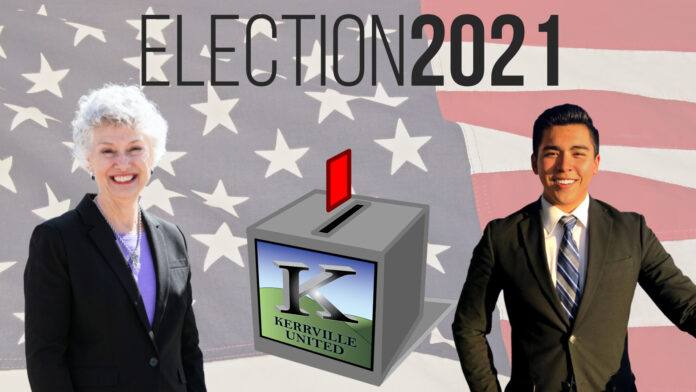 Civility in government is our drumbeat at Kerrville United — in fact, a lack of civility is what prompted us to begin this little website five years ago. And once again civility is on the ballot in the choice for Kerrville City Council. In Kerrville politics, two camps have emerged: the optimistic civil faction and the aggrieved pessimists. These two camps have become more and more defined and entrenched since 2015, and the two sides have offered divergent visions for the future of Kerrville.

Various candidates have been put forth from each side over the past several years, and astute observers will immediately recognize that this year’s candidates represent those competing visions: the side of optimism and civility embodied by the likes of Kim Clarkson, Judy Eychner, Bill Blackburn, and Mary Ellen Summerlin, and the pessimistic naysayers led by Bonnie White, George Baroody, and now Roman Garcia. After suffering several defeats at the polls, the posse of pessimism has passed the torch to the youthful Garcia, who, at 19 years of age, has not yet established a resume for himself, but attempts to gain power by dividing rather than uniting.

Rally together, or divide and conquer?

There are numerous differences between these two candidates, but the starkest divide shows up in the campaign styles of each camp. Summerlin exudes optimism and stresses unity of purpose, while Garcia attempts to divide and conquer by launching ludicrous charges against his opponent, all the while hiding behind the thin cover that his supporters paid for the ad — not his campaign. If history is a guide, optimism will win the day. Kerrville abhors negative campaigning and dirty politics, a fact made obvious if we use the elections of 2018, 2019, and 2020 as our reference.

Last week, Garcia’s camp launched a series of advertisements attacking Summerlin, accusing her of favoring open borders, gun confiscation, and higher taxes. During the chamber forum, Summerlin asked Garcia directly if he’d walk back these attacks, but she was ignored. Later, she produced a video response that won her high praise from voters who prefer to hear about the candidates’ competing visions for Kerrville rather than be subjected to obviously contrived character assassination attempts. Garcia still has not responded to Summerlin’s calls to either endorse the ad or distance himself from it, and more attack ads will appear in upcoming newspapers this weekend and next week.

Paint the town red or blue

When a candidate doesn’t have a compelling message, they may resort to attack ads, and they may attempt to align themselves with familiar themes and popular ideologies. In a city that voted almost 80% for Republican candidates in November 2020, Garcia attempts to sway right-leaning voters by claiming to be the only “true conservative” in the race. He sought endorsements from local Republican institutions, causing a rift in the county Republican organization when they advocated for Roman. Garcia campaigns openly as a Republican, even though the city charter forbids attaching party labels to local elections. This is not the only ethical imperative that Garcia openly flouts — more on that later.

Despite Garcia claiming to be the only choice for conservatives, numerous high-profile Republicans have endorsed Summerlin over Garcia, with many appearing in a group ad featuring Republicans, Democrats, and Independents supporting Summerlin. Even those that may disagree on national issues agree that Summerlin is the only responsible choice to guide our city forward.

Nationalizing a local race will not help the council govern more effectively. Rather, introducing another obstacle will only sow division and obstruct constructive progress on the dais. Moreover, the national issues that Roman is attempting to inject into this race are matters that our city council has never, and will never, take up. Gun rights and immigration policy have never been policies that a council can influence, and bringing them up in a local race distracts from the real issues that council deals with on a daily basis — infrastructure, economic development, and finance.

Rather than attempting to divine someone’s intentions from comparing national political leanings, we should examine their local record. While Garcia does not have experience in public office, he does give us plenty of examples of his leadership style. He has appeared before council and before Commissioners Court many times in recent years, most often to lecture our officials about a perceived error or to defend himself for violating various rules, such as his recent appearance before Commissioners Court to defend his actions that violated the county’s facility policy during COVID restrictions. While he appears polished in his suits and ties and is blessed with a youthful enthusiasm, his appearances come across more as performance than honest petition.

Garcia has not served in a leadership position with the exception of a student civic group that he led under the guidance of Mayor Bonnie White. Members of that student group resigned in large numbers and the committee was eventually disbanded due in part to the abrasive style of its figurehead, Roman Garcia.

Summerlin’s history of service in public office and for private charities illustrates a much different approach to accomplishing goals. She enjoys the un-glamorous work of a policymaker, diving into the weeds to examine issues and make policy suggestions. She is able to draw careful distinctions and understands both sides of issues. Her slogans don’t fit on bumper stickers, and she might even be described as a policy wonk. But hard work and dedication to the job at hand is what we need from our elected leaders — not empty rhetoric and platitudes.

Summerlin’s style of service on council can be revisited by watching old recordings of her time on the dais from 2016 to 2018. She never hesitated to speak truth to power, whether that was by challenging Mayor Bonnie White or by asking pointed questions of staff or members of the public that spoke to the council. A clip is currently being played ad nauseum on Harley Belew’s radio program that, of course, is taken out of context. Summerlin explained the full context of the clip during her appearance on KDT Live on Thursday, noting that a small group of the mayor’s supporters continuously abused the citizen’s forum by constantly attempting to rehash issues that had long-since been resolved. But contrary to what Belew would have his listeners believe, Summerlin’s suggestion was simply to move the visitor’s forum to later in the meeting so that petitioners that were present to discuss matters on the agenda would be allowed to speak sooner rather than later, and wouldn’t be subjected to played-out arguments that were brought up week after week at the beginning of the meeting.

View that motion below. As explained, there was no move to disallow public comments, rather a rearrangement of the agenda to move that forum to later in the meeting — a motion that passed 4-1.

Apart from nebulous labels and controversial endorsements, Roman hasn’t offered any substance on what he might do differently if elected. His primary platform seems to be that he wishes to increase public participation in local government. But given the substantial buy-in the public has already shown in local government efforts such as the Kerrville 2050 plan, this appeal doesn’t seem to resonate with anyone who is actually plugged into the happenings at City Hall. The public has never had more access to public meetings, with all meetings being broadcast on the internet and cable TV, and with citizen input invited on every single agenda item that the council takes up (even during COVID-restricted meetings). Kerrville United has always advocated for more public participation in local government, but that is a talking point that every politician can get behind — it’s not a distinguishing characteristic in a council race.

Garcia, when speaking to local voters, suggests lowering taxes, but also proposes various programs that the city could undertake. Lowering taxes while also increasing government expenditures is dangerous path, and when questioned about this perceived disconnect, he doesn’t have a good answer. The truth is that the city has maintained or lowered the tax rate every year for the past 11 years. Valuations are on the rise as housing prices skyrocket, and council will explore the option of lowering the tax rate further if it is prudent. (We’ll have to wait and see how revenues shake out in the aftermath of the current national economic downturn.) But promising a tax reduction (lowering revenues) without a corresponding cut in expenditures is not a course that this city should ever take, and cannot take, as it is required to maintain a balanced budget. City leadership has worked hard to put us on firm financial footing, and undoing that careful work is not a recipe for success — or for victory in an election.

Failure to do the minimum

As we’ve reported previously, Roman Garcia has failed to file his financial reports on time over and over again. In our view, this should be the absolute baseline test of competence for an elected official. By not filing his financials on time, he has demonstrated that he cannot be trusted to follow the law and the rules laid out for candidates and office holders. And there’s no one to blame but himself — he is his own campaign treasurer.

Referendum on the status quo

During recent appearances, Mary Ellen Summerlin has stated that a vote for her is a vote to continue the status quo. Place 1 Councilman Gary Cochrane has endorsed Summerlin as his replacement, and Summerlin has stated that she is pleased with the work of her would-be predecessor and the current council in general. She has framed the race as a referendum on the status quo: if you like what’s happening, vote for me; if you don’t, vote for my opponent.

Continuing the status quo is the prudent choice for Kerrville. During the past few years, council has achieved a great deal, including:

These achievements have only been made possible through the election of stable, forward-thinking leaders that currently head our city government. Before the political awakening of 2018 that ushered in civility in place of vitriol, businesses feared making major investments in Kerrville. The environment was too unstable. This council and its immediate predecessors have calmed the waters and set a course for future success: a strong economy, well-paid jobs, attractive amenities, a vibrant downtown, excellent infrastructure, and high quality of life, all without raising taxes in over 11 years.

The leaders of Kerrville are all pulling the wagon in the same direction — toward prosperity and civility. Garcia will turn over that apple cart, pushing us back to the dark days of division and disarray that marked the White era. In this election, we must ask ourselves if Kerrville is moving in the right direction, and based on all measures, the answer is yes.

Summerlin will serve our city with dignity, poise, fairness, and civility, and for these reasons and more, I will cast my ballot for Mary Ellen for City Council Place 1.