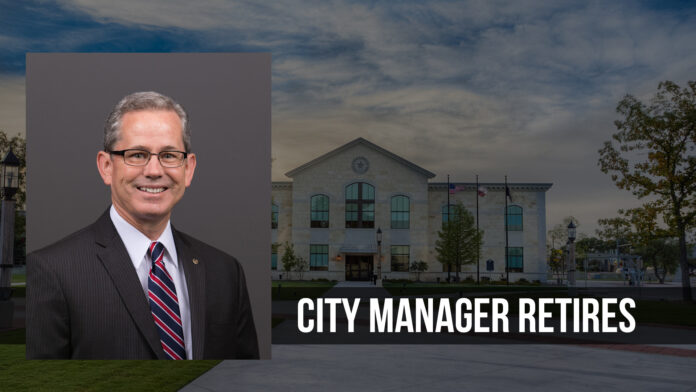 On the first business day following the municipal election, City Manager Mark McDaniel has announced his retirement, effective June 1. He has served in this position since March 2017 — just over four years.

“After a 35 year career in municipal government management it is time to move on to the next phase of life, and perhaps a second career in a new field,” said McDaniel. “My wife and I plan to move closer to grandkids in the coming months so we can be a larger part of their lives, but we will truly miss all of the great friends we have made during my four years of service as city manager for Kerrville.”

McDaniel came to Kerrville during one of the most tumultuous periods in recent history. Former City Manager Todd Parton resigned in 2016, along with Deputy City Manager Kristine Day, during the beginning of the contentious reign of Mayor Bonnie White. McDaniel took over in May 2017, and ushered in a period of prosperity and stability as White was defeated by Mayor Bill Blackburn, and civility was restored to city hall.

City Council has the authority to hire and fire only two city staff members: City Manager and City Attorney. Council will be tasked with hiring a new city manager, and/or appointing an interim city manager while the selection process takes shape. None of the current city council members have served during a vacancy in this position.

A city manager is the municipal equivalent to a CEO of a corporation. The council appoints a city manager, and that person is responsible for hiring staff and running the day to day business of the municipality. The city council sets the policy, approves the budget, adopts ordinances, establishes goals, and supervises the city manager’s performance. But it is up to the city manager to execute those stated policy goals, hire and fire staff, prepare and supervise the budget process, and handle administrative duties.

More information about city managers and the council-manager form of government is available from the Texas City Management Association: https://www.tcma.org/DocumentCenter/View/118/Council-Manager-Form-of-Government-PDF

His accomplishments in Kerrville are numerous, including:

“I’m proud of all of the things that we have accomplished as a team, and I am humbled by the servant hearts of our City Council, as well as the dedication and professionalism of the tremendous City of Kerrville staff,” Mark noted. “Thank you for the opportunity to serve the citizens of Kerrville.”

Kerrville at a crossroads

With the departure of McDaniel and the election of newcomer (and White ally) Roman Garcia, Kerrville stands at a crossroads. From time to time, the political pendulum swings from periods of relative calm and stability to cycles of divisiveness and discord. The choice of a new city manager to succeed McDaniel and next year’s elections for mayor and two places on city council will shape the future of our community.

Now is the time to renew our focus on local politics and governance to ensure that Kerrville continues its momentum toward managed growth and prosperity for all.

How many voters will turn out on election day?