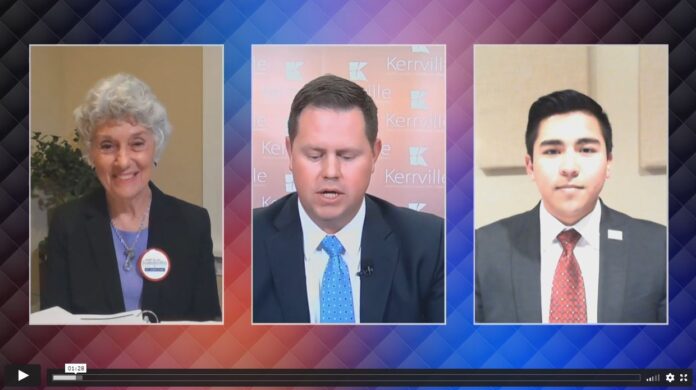 Right out of the gate on Thursday night, during the Kerrville Area Chamber of Commerce Candidate Forum featuring candidates for City Council Place 1, Mary Ellen Summerlin challenged her opponent, Roman Garcia, to disavow divisive politics — a challenge that went unanswered by Garcia.

This flashpoint in an otherwise normal election campaign was sparked when supporters of Garcia ran an advertisement in the Hill Country Community Journal on Wednesday claiming that Summerlin was interested in gun confiscation, higher taxes, open borders, and ignoring the constitution. The ad is pictured below.

The fine print indicated that this ad was purchased by William H. Fitch, Barbara Dewell, and Bev Avery, supporters of Mr. Garcia.

During her opening statement, Summerlin stated: “An attack ad, unlike anything I’ve ever seen in Kerrville before, appeared in the newspaper yesterday, paid for by Mr. Garcia’s supporters. The allegations in it are false and inflammatory — the kind of scare tactics that so many of us have become sick of. And so I must ask, Roman, do you approve of ads like that? Do you favor tactics such as these for our community? Because if you do, I think that’s as important as any other issue in our election. You’ve presented yourself as a young man that any community can be proud of. And I’m hoping tonight to hear you disavow that ad.”

Garcia did not respond to Summerlin’s invitation to comment on the ad itself. However, during his closing statement, Garcia invoked language similar to that which was used in the ad, stating, “In this election we’re also looking at values. You have to know what your candidate’s principals and values are. This is a nonpartisan election, which means I or Mrs. Summerlin, whoever is elected, will not hold office as a Republican, Democrat, Independent, but we will hold office under our principals and the values that we hold… The values that we hold determine the decisions that we make…”

In her closing statement, Summerlin said that she was “disappointed and troubled” that Garcia did not distance himself from the claims and tactics used in the advertisement. On Friday, she posted an advertisement on social media responding to the charges. That ad appears below.

The forum can be viewed in its entirety below. Kerrville United applauds the Chamber for hosting this forum — the only forum that is available for all to view online.