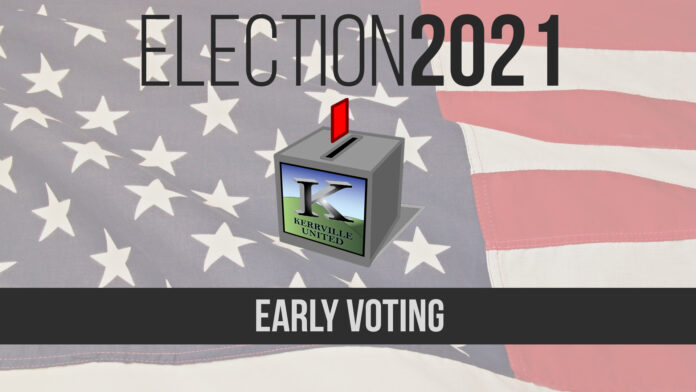 Early voting will continue on Monday and Tuesday next week, and the last chance to cast a ballot in the municipal race will be on Election Day, Saturday, May 1. Voters turned out this week despite inclement weather during part of the week. As of close of business on Friday, 1,067 in-person voters and 168 mail-in votes had been tallied, for a total of 1,235 ballots — approximately 7.5 percent of the total registered voters in Kerrville.

The last race that provides a good comparison is the May 2017 election, which also had only one contested race. The chart below illustrates the in-person turnout comparison for the first five days of early voting. After five days in 2017, nearly 900 voters cast a ballot, compared to 1,067 this year. So, using this comparison, the turnout is comparable to the 2017 race four years ago.

Early voting is open on Monday and Tuesday from 8:00 AM to 5:00 PM at the Cailloux Theater lobby on Main Street in Kerrville. A valid ID is required to vote.

Each candidate filed a campaign finance report by the deadline on Friday. This is the last report that the public will see before election day. Garcia filed his report on time for the first time in the past three periods. The reports show a wide disparity in contributions and spending. Here are some of the takeaways.

Summerlin outraised Garcia during both reporting periods, and in total has outraised her opponent by a factor of four.

Summerlin’s campaign has also out-spent Garcia’s, with over $18,000 in expenditures compared to just over $1,400 reported by Garcia.

One trend that we’ve spotted in this election — and one that will not be evident in these reports — is the purchase of advertisements by outside groups. Supporters of each candidate have purchased advertisements in local newspapers. Since the campaigns did not pay for these ads, those numbers will not appear in the financial reports.

Summerlin also outperformed Garcia in the number of donors that contributed financially to the campaigns. A total of 172 individual donations have been reported by Summerlin, compared to only 15 by Garcia.

What to make of the financial reports

Campaign finance reports give us insight into several important factors:

Why do these questions matter to us, as voters? For one, the baseline measure of any candidate’s ability to manage their affairs is their ability to file timely and according to the law. If elected, the candidates will be expected to scrutinize huge budgets, maintain a file of correspondence and paperwork to satisfy state open records laws, and meet various deadlines and milestones to support their work on council. If a candidate makes a habit of failing to file the required documents on time, this is not a good sign that they’ll be able to perform their more important duties later. Summerlin has filed each report on time, whereas Garcia has failed to file on time for four of the last six reporting periods.

The sad reality of running for political office in a town our size is that it is expensive to operate a campaign. Major expense categories include signage, mailers, websites, social media, email, and traditional advertising. Without raising significant sums of money, a candidate will have fewer opportunities to spread the campaign message. Motivating supporters to contribute financially is one of the more difficult aspects of campaigning, but is increasingly necessary in the digital age, when reaching voters requires digital and traditional marketing efforts. If a candidate has a large number of supporters that are willing to “put their money where their mouth is,” it could be an indication of that candidate’s support among key constituencies.

The number of individual donors may tell us how diverse a candidate’s base of support may be. If a large number of individuals are willing to give small amounts to a particular candidate, a candidate may be characterized as having “grass roots support.” Whereas if the majority of donations come from only a small group of large donors, a candidate may not have broad-based appeal, may not be skillful at fundraising, or may have other means of financing the campaign. These lists of donors can tell us a lot about a candidate’s power base. Summerlin boasts an impressive number of small donors, whereas Garcia accounts for a total of only fifteen donors throughout the several months of campaigning that has taken place.

Viewed in totality, it’s clear that one candidate has a significant financial advantage — Mary Ellen Summerlin. But that’s not the whole story in this campaign, since some contributions and expenditures have not yet been accounted for or incurred, some promotional efforts won’t be included on any report, and significant advertising expenses are likely during the final week of the campaign leading up to May 1.

Campaign finance reports are publicly available at the City of Kerrville’s website: https://www.kerrvilletx.gov/DocumentCenter/Index/1714