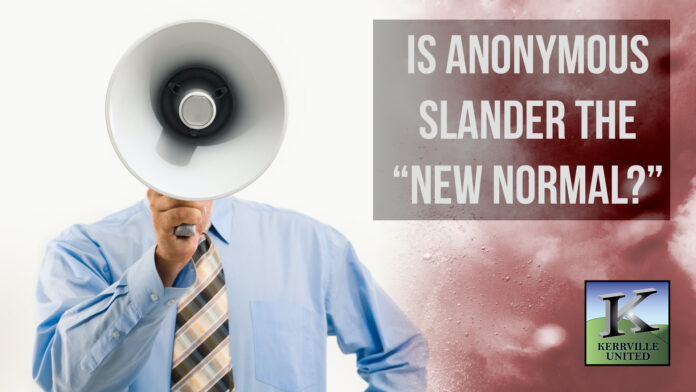 As early voting came to an end Tuesday evening, a conversation was overheard in a local retail establishment. One person asked another what they thought about the “evil” woman running for city council. This person had heard Harley Belew attack Mary Ellen Summerlin every hour, each morning, for the past several weeks on his radio program. According to this listener’s interpretation of Belew’s comments, if one is a true Christian, they must vote for Garcia.

Evil. That’s how our neighbors are describing other neighbors who seek public office. And we wonder why good people sometimes won’t run for office in Kerrville.

A few weeks ago, ads began appearing in local newspapers claiming that Summerlin supported gun confiscation, raising taxes, open borders, and other nonsense without providing any source or documentation to support these claims. The ad prompted a response by Summerlin denouncing the ad as false and challenging her opponent to distance himself from these attack ads. No response from Garcia, and the ads continued to run.

Also a few weeks ago, a website was discovered calling itself “Mary Ellen Revealed.” We will not link to slanderous content here, but surmise it to say that it contained more of the same false talking points on a hastily arranged website that does not include any information about its owner or author. The site makes blatantly false claims such as “Summerlin Supports Policy to Take Citizen Guns” without offering any evidence.

A profile on Facebook appeared under the same name, “Mary Ellen Revealed.” When challenged in a comment thread, however, this veiled individual blocked and banned your author, concealing their true identity and hiding behind online anonymity.

Why must these attackers hide behind a veil of anonymity? If they are so sure of their claims, why not state them in the light of day? Anonymous claims, especially dubious ones, must be examined with extra scrutiny, and the motivations of the anonymous authors must be questioned. If any of their claims are true, why not speak publicly?

These tactics are not new for a certain group of rabble rousers and shadowy figures that continually throw mud at political candidates, harass those who think differently from them, and even resort to physical intimidation to try and reach their goals.

In the 2018 race, then-mayor Bonnie White’s husband was accused of harassing children at the polling place. He also held up a sign with a political cartoon disparaging members of the city council and candidates for that race.

Supporters of White circulated pamphlets accusing her opponent, Bill Blackburn, of horrible things and making many of the same claims that are now being launched at Summerlin. These attackers also hid behind anonymous claims and would not attach their names to these slanderous back-alley attacks.

These tactics are not new — they’ve been with us for at least three years now. But they have no place in Kerrville. Voters have agreed, selecting civility over hostility when casting their ballots overwhelmingly for Blackburn and his allies — twice.

If these tactics are successful this time around, will dirty tricks become the new normal in Kerrville politics? If Kerrville voters elect Garcia, will it empower future candidates to engage in false attacks? Will Kerrville allow this to become the routine? What does this style of campaigning teach our young people about community involvement?

These are not difficult questions. Your vote will send a message about what tactics you personally endorse. Make your message heard this Saturday, Election Day, at the Cailloux Theater.