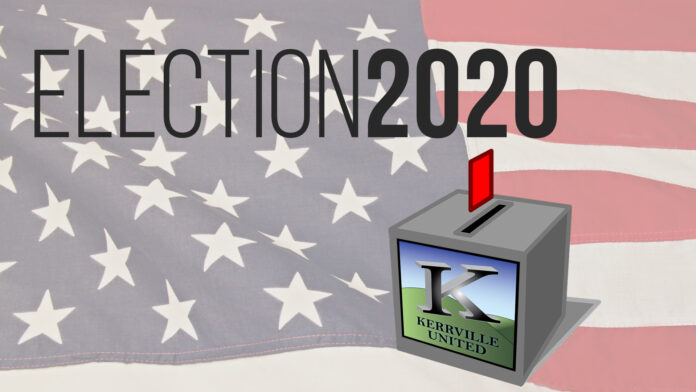 The final numbers are in (although they’ll remain unofficial until all mail-in ballots are counted and the vote is officially canvassed) and Kerr County saw a huge turnout for local races including Kerrville City Council, Sheriff, Commissioners Court Precinct 1, and the local proposition for Precinct 2. Almost 28,000 voters cast a ballot either via mail, early in-person, or on election day. That represents a 74% turnout of registered voters in Kerr County.

For the city municipal elections, this was a unique year. These elections are typically held in the spring, with only the municipal races on the ballot. In the 2018 municipal election which included the mayor position, about 4,000 voters turned out. This year, since these races were on the general election presidential ballot, over 10,000 votes were cast — an historic turnout.

Incumbents Blackburn and Eychner retained their seats, while challenger Brenda Hughes unseated Delayne Sigerman. The results (as of today) are shown below.

The biggest surprise of the night was the Place 4 race. Brenda Hughes won a decisive victory over incumbent Delayne Sigerman. Most observers recognized that the three pairs of candidates had aligned themselves as incumbents versus challengers. The three incumbents campaigned in harmony, and at times in cooperation, as did the three challengers. Hughes significantly outperformed her allies, winning a 2-to-1 majority in that race. The surprise was that the vote totals in that particular race were so different from the other two races. Observers that forecasted a “sweep” of either incumbent or challenger victories were confounded, including your author.

Another important data point is the “under votes.” Under votes are ballots on which the voter did not select either candidate for a particular race. In this election, there were 1,138 under votes for the mayor race, 1,550 for Place 3, and 1,982 in Place 4. Those are significant numbers of under votes, and can probably be attributed to the fact that most voters in this election had not ever cast a ballot in a municipal race.

Would the outcomes have been the same if the election were held on-time in the spring? We will never know, but we do know that the turnout would have been much lower, and the voters would have consisted primarily of very interested, knowledgeable residents, rather than including those who may be “low-information voters” in this general election. It’s an interesting thought experiment, but without polls or surveys or questionnaires, we will never know for sure.

Blackburn, a Democrat running in this nonpartisan race for City Council, has now defeated two Republican candidates in back-to-back elections. He bested the challenger David Barker by 9 percentage points. Blackburn stated on his personal Facebook page that this term would be his last. In 2022, he plans on stepping down and handing over the reins to the next victor in that year’s mayoral race.

Eychner received over 6,200 votes, beating her challenger by 22 percentage points. This will be her second term on City Council, having won her first election in 2018. Her challenger, Roman Garcia, is the son of last year’s city council candidate Mario Garcia.

After winning the runoff election over the summer, the outcome for the general election was never in doubt, and Republican Larry Leitha defeated the Libertarian Warren Funk with 87% of the vote. A third-party candidate has never won a competitive race in Kerr County, according to our analysis of the historical record. Leitha will take over for long-time Sheriff Rusty Hierholzer, who is retiring.

Harley Belew was in the driver’s seat and ready to coast to an unchallenged victory after drawing no primary opponent in the spring. However, on his radio program, he made several controversial comments that eventually drew a challenger — write-in candidate Konrad Wert. But Wert’s campaign was an uphill battle, since his name would not appear on the ballot, and only a blank line would indicate that there was a challenger to Belew, who won his first election in 2016. Wert used the FCC’s equal time rules to get airtime on Harley’s radio station, including a Saturday morning radio show, but his efforts were not enough to seriously threaten the hard-right Republican Belew.

Proposition A for Precinct 2

Did you know that in 2020 it is still illegal to sell liquor in parts of Kerr County? The Precinct 2 Prosperity Program challenged that antiquated blue law and the measure won 82% of the vote. According to the P2P Facebook page, “Our mission is to pass legislation that will legalize the sale of all alcoholic beverages, including mixed beverages in Precinct 2 with a vision to bring increased economic opportunities to our region.”