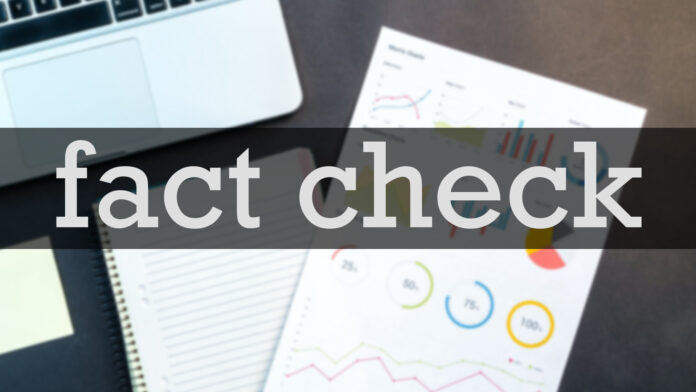 Every political campaign contains remarks that can be classified as embellishments, exaggerations, or spin, including in national, state, and local races. In recent years, the role of fact-checkers has increased in importance, adding context and clarity to the race, and calling out false claims. Our local city council election this year features a trio of incumbents and a trio of challengers, and the latter has been accused of making misleading or false claims. Here are a few examples along with the fact-checks supplied by individuals, media, and government responses.

CLAIM: David Barker, candidate for mayor, has repeatedly claimed that the City of Kerrville has plans to implement a system to inject treated wastewater into the drinking water supply. This is false.

Mr. Barker is an ally and friend of former mayor Bonnie White and her husband Robert, and this claim was first circulated by Mr. White over a decade ago. The Whites have made comments on social media and local newspaper comment sections purporting the claim that the city will imminently use treated effluent for drinking water. One such claim can be seen in this Kerrville Daily Times comment from 2018, while his wife was mayor. The Whites and Mr. Barker call it, “toilet to tap.”

While this claim is not new, it has been recycled (pun intended) for the 2020 election, with Barker claiming during the Kerrville Area Chamber of Commerce Candidate Forum that, “reuse water from the sewer system was contemplated to be used for drinking water.” (At timecode 1:48:50.)

Former Mayor Stephen Fine notes on Facebook that, “The reuse/treatment of the effluent for potable water has been discussed as a possibility for years.” This is true. The matter has been discussed as a method of last resort should Kerrville’s water supply become completely exhausted in the future. And a city would be irresponsible if it didn’t discuss all of the available options for long-term planning. However, it is not a strategy that is currently being considered, and given the success of the recent Ellenberger water well testing, as well as the potable water savings achieved via the construction of the reuse pond and effluent lines for irrigation of golf courses and athletic fields, along with the ASR wells that store millions of gallons of water for use during droughts, the city does not anticipate having to implement any alternative strategies for the duration of the long-range plan.

The City of Kerrville took the extraordinary step of issuing a press release challenging Mr. Barker’s claims about the water supply and the long range water plan. The city’s official release stated:

It should be emphasized that “advanced treatment of treated wastewater to create a potable reuse supply” was an alternative water strategy suggested by HDR, NOT the city, in the event of severe drought conditions and only if the other recommended strategies were not successful. The city is not considering using treated water for potable uses, and in fact cannot do so under current conditions, as the HDR report points out on Page 34:
“The City does not currently have the infrastructure to treat and distribute treated wastewater effluent to potable water customers.”
The city’s 95-million gallon reclaimed water storage facility was built to supply the needs of large irrigation water customers like Scott Schreiner Golf Course, the Kerrville Sports Complex, the Kerrville Soccer Fields, Schreiner University, Tivy High School, Comanche Trace Golf Course, and River Hills Golf Course with treated wastewater. These facilities formerly relied on potable water for their irrigation needs, so the use of treated wastewater is conserving vital potable water for our citizens, and will continue to do so during periods of extreme drought conditions.

CLAIM: The City of Kerrville has large sums of “unsecured” debt. This is false.

During the Chamber Forum, candidate for Place 4 Brenda Hughes claimed that the city has “ten to fifteen million dollars in debt that is unsupported or unsecured.” (Minute 34:50 of the candidate forum.) She suggested that Kerrville needs to “separate the wants from the needs.”

Also during the forum, challenger for Place 3, Roman Garcia, claimed that the city had not been transparent enough during this year’s budget process. (1 hour 13 minutes of the candidate forum.)

The City of Kerrville again took the unusual step of publishing a fact-check of this claim. In an article appearing in the Hill Country Community Journal on October 7, the newspaper outlined the process by which the city holds budget hearings and workshops, publishes newspaper articles, televises meetings, live streams meetings, and hold two readings each for the tax rate and the budget ordinance. Further, the city’s finance department has received numerous awards for exceptional presentation of budget documents, financial reporting, and transparency, including the Texas Comptroller of Public Account’s Transparency Award for Traditional Finances.

The article goes on to state that the city has NO unsecured debt, and that the city’s debt financing has once again been rated “AA” by Standard & Poors — and independent global ratings agency relied upon by creditors.

The city’s total debt of approximately $66.5 million was outlined and categorized as follows:

• $40.7 million is supported by Water Fund revenue and pays for projects like the new Legion Lift Station (which will provide expanded water service to southeast Kerrville), the reuse pond (which provides treated irrigation water to large commercial water customers and thereby saves valuable drinking water for citizens), and other water and sewer infrastructure needs.

• $11.8 million is supported by 4B sales tax revenue and pays for projects like the Kerrville Sports Complex and the River Trail, both of which generate substantial dollars for the local economy.

• $14.0 million is supported by property taxes and pays for streets and drainage improvements and expansions, as well as other needed infrastructure projects and city operations.

Former councilperson George Baroody penned an op-ed in the Kerrville Daily Times on October 3 that made multiple claims that the City of Kerrville refuted in a response published on October 8. The City pointed out the extensive training, experience, awards, and oversight of the city’s financial department, drawing contrast between Baroody’s lack of credentials or experience in high finance.

In addition to the city’s response, Baroody’s ally Bonnie White, former mayor, also refuted some of his claims about deferred street maintenance by stating in a letter to the editor that, “…a maintenance schedule was adopted which included a combination of slurry seal, crack seal, and reconstruction projects until debt could be issued for a major reconstruction project such as we are seeing currently.”

The full text of the City’s response to Baroody follows:

CLAIM: The City and HEB are at fault for not reconstructing private property along Lemos Street.

In a campaign video released on October 10, challenger for mayor, David Barker, offered his opinion that the City and HEB are somehow at fault for not removing or renovating private property — property not owned or controlled by the city or HEB — on Lemos Street. Ironically, the shot had to be framed just right to avoid seeing the brand new 106,000 square foot HEB store being developed behind this set of buildings, and avoided the brand new paving on Lemos Street that took place just one day before this video was filmed.

Place 3 Councilperson Judy Eychner fired back on Facebook, stating that, “Mr Barker is completely mistaken and imparting incorrect information. HEB very, very much wanted that property and did everything in their power to purchase it and it could not be done! (Just ask Greg Nichols, General Mgr). The city cannot condemn or re-develop private property w/out the permission of the owner or in this case, the owners.”