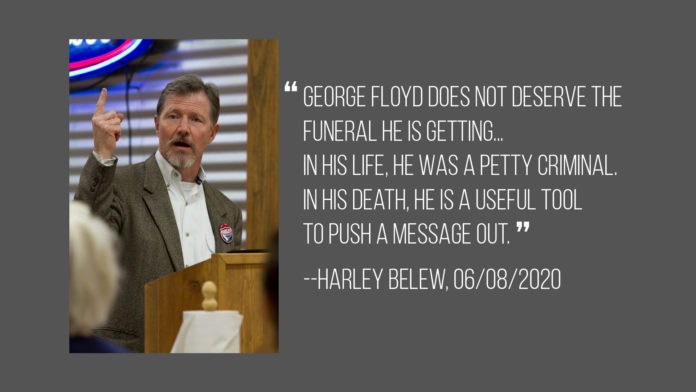 Thousands attended a memorial service in Houston for George Floyd on Monday, an unarmed black man whose killing sparked global protests over racial injustice and police brutality. Also on Monday morning, Minneapolis residents considered the announcement by a majority of their city council that called for disbanding the police department and their intention, “to recreate systems of public safety that actually keep us safe.”

Two local elected officials took opportunities on Monday to speak publicly about the current crisis that grips the nation, but used strikingly different tones and delivered sharply different messages to their respective audiences.

We believe these statements are important because each elected official has a drastically different take on the situation, and both aired their opinions on public airwaves on the day of George Floyd’s memorial service, following a weekend when peaceful protests were seen in Kerrville, Fredericksburg, and Boerne. This particular national issue has resonance at the local level, and we believe all voters should hear what their elected leaders have to say.

First, Kerr County Commissioner for Place 1, Harley Belew, took to his radio program this morning to criticize George Floyd and question the need for a memorial service. Belew, on the day of Floyd’s memorial service, called Floyd a “thug” and a “petty criminal.” Belews statements on Monday morning included:

The entire segment that aired on Mr. Belew’s morning radio program is available in the YouTube video posted above. Belew has a program each morning on Hill Country Patriot Radio, part of the Ranch Radio Group. Mr. Belew is running unopposed for Precinct 1 Commissioner and will be on the ballot this November. He will serve a second four-year term beginning in January 2021.

Mayor Bill Blackburn used the occasion to visit with Kerrville Daily Times managing editor Louis Amestoy on his video program this afternoon. Blackburn discussed his relationships with black leaders and his involvement with programs to help increase access to healthcare at the Doyle Community Center. Blackburn’s comments included:

Mr. Blackburn is seeking re-election as Kerrville’s mayor and will be on the ballot this November after the May elections were postponed by Governor Abbott.