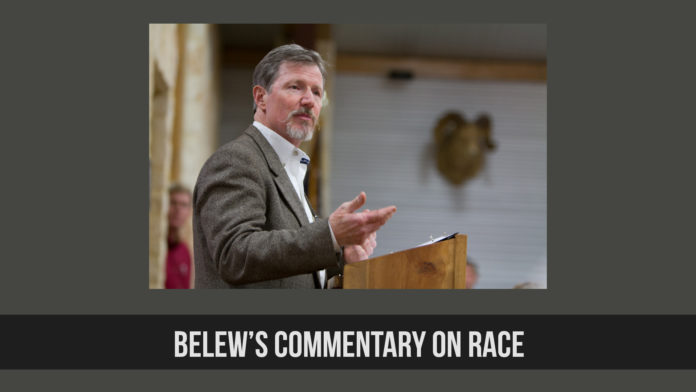 This week the public heard what one of its County Commissioners had to say about the killing of George Floyd and the subsequent events that transpired after his death, including protests around the country condemning police brutality against black people. The story was picked up by the Kerrville Daily Times and ran at the top of the Times website on Tuesday and Wednesday.

Defenders of Precinct 1 Commissioner Harley Belew argued on social media that his remarks were not racist or racially charged, but were simply questions about the politicization of Floyd’s murder. Critics shot back and stated that the remarks were unequivocally racially charged and should not have been stated by an elected official representing the entire community.

Belew discussed the coverage on his radio program this morning and dismissed the stories as the media trying to make him look bad. Belew did not apologize, but he softened his statements from the previous day. He denied that his comments about Floyd were racist or racially charged.

Kerrville United’s role is to present the information and resources to let the public determine what is and is not acceptable from their public officials. This article continues that tradition by bringing several potentially problematic clips to the public’s attention. By no means do we believe that differences in opinion should be “shut down” or restricted. We believe that voters should know where their elected officials stand, what they say in public, and should use that information at the ballot box. Freedom of speech is in no way being restricted by simply airing some of the more controversial statements that a public figure delivers. Rather, that freedom of speech is being amplified here to our audience.

Kerrville United aims to deliver these source materials and allow the discussion to take place. During the course of the discussion over the past several days, some additional clips have come to our attention, and are presented here. Further review of additional program recordings is ongoing, and we will continue to shine light on any new problematic audio recordings that we encounter.

Race as a favored topic

Upon further review of recordings of Mr. Belew’s program, it is apparent that race and racism are favorite topics of discussion. Belew is on air each morning from 6 AM to 9 AM on Hill Country Patriot, part of the Ranch Radio Group based in Kerrville. Race and racism is such a favored topic that Mr. Belew has multiple sound effects cued up that play several times per show when he is discussing race, including one that says sarcastically, “that’s racist,” and another that sings to a jingle, “everything’s racist.”

Kerrville United and its volunteers continue to review archives of this radio program. Here are some examples of Mr. Belew’s view on race and racism in America, which are available as audio recordings below.