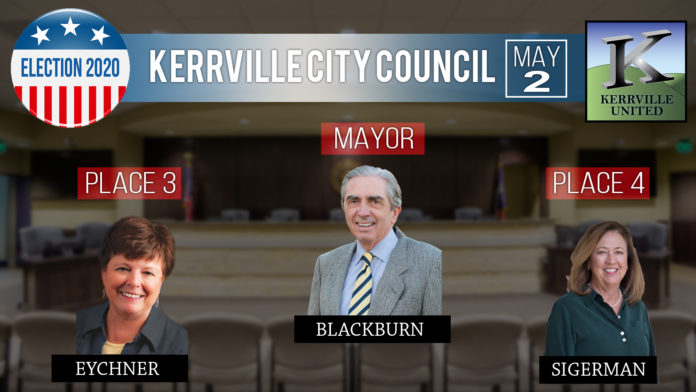 According to publicly available information from city officials, all three City Council incumbents up for reelection this year picked up application packets Thursday to be on the ballot in May. By picking up packets, all three signaled their intention to run for reelection in 2020. Kerrville will elect representatives to the positions of Mayor, Place 3, and Place 4, currently held by Bill Blackburn, Judy Eychner, and Delayne Sigerman, respectively.

Each of these three incumbents started their first terms in May 2018. Kerrville elects the Mayor, Place 3, and Place 4 representatives in even years, and Place 1 and Place 2 representatives in odd years. Each term is two years in length. In 2018, Blackburn defeated incumbent Mayor Bonnie White, Eychner defeated Gary Cooper, and Sigerman ran unopposed.

In addition to the incumbents who picked up packets on Thursday, the first business day of the new year, one other potential challenger has also picked up a packet. Former city councilman for Place 1, Vincent Voelkel, picked up an application packet on October 14, 2019, and has signaled his intention to run for mayor against the incumbent Blackburn. Voelkel served in Place 1 from 2016 to 2018 but did not seek reelection in 2018. He stepped down in May 2018 as new Place 1 representative Gary Cochrane took his seat.

This time of year is referred to as “packet season” as election observers pay close attention to see who picks up a packet from the City Secretary’s office in City Hall. Although picking up a packet usually signals a candidate’s intention to run for office, it’s not official until they turn in their completed packet between January 15 and February 14.