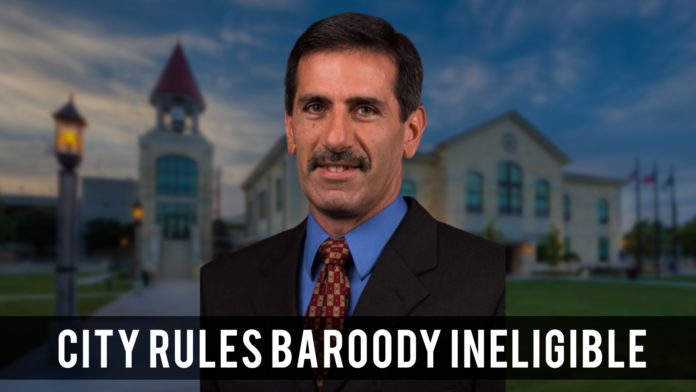 DEVELOPING: WILL BE UPDATED AS NEW INFORMATION BECOMES AVAILABLE

On Friday, George Baroody was notified by city officials that he is currently ineligible to run for a seat on city council due to a conflict with nepotism rules established in the City Charter. A press release issued by city hall on Friday afternoon did not include Baroody on the list of candidates whose applications were accepted.

Baroody filed paperwork with the City Secretary on Thursday to seek a spot on the ballot for City Council Place 4, challenging incumbent Delayne Sigerman. City officials reviewed his application and determined that Mr. Baroody does not meet the eligibility criteria established in Section 2.02 of the City of Kerrville Charter.

Kerrville’s city charter was amended in 2020, following the November 2019 special election that presented 18 propositions to city voters, of which 16 propositions were approved. One of the proposed changes included adding a provision to prevent nepotism. Proposition C, as this measure was labeled, passed with nearly 81% of the vote. The Charter Review Committee explained their reasoning for this proposal as follows:

The recently-adopted provision of the charter precludes any candidate from running for election that is related within “second degree of affinity or third degree of consanguinity” to certain executive positions within the City. A chart explaining these degrees of affinity is presented below.

The deadline to file for a place on the ballot expired at 5:00 PM on Friday, February 14. Stay tuned to Kerrville United for more election updates.