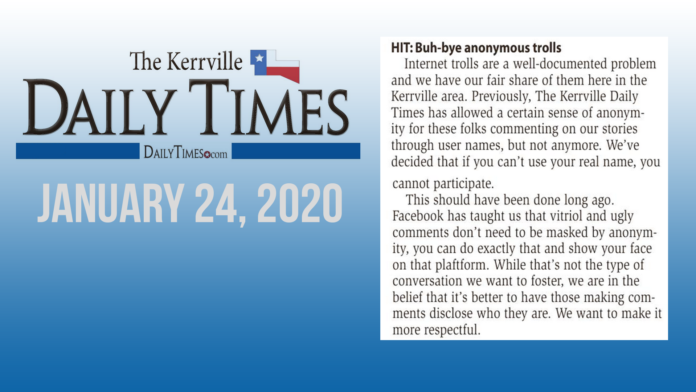 For many years, anonymous comments were allowed in the comments sections of the Kerrville Daily Times articles, and anonymous keyboard warriors would post negative or hateful comments on various articles. In today’s opinion section, the editorial board announced that anonymous comments will no longer be allowed.

As of this writing, the comment section has changed, but so far, the names of some of the commenters aren’t 100% clear. We hope this is a work in progress and that a user’s full name is required for future comments.

Here’s what we know about the most ubiquitous trolls so far, from matching up the user names with the name fields from the KDT website. Current as of January 24 at 10:00 AM. (These users might be able to change their public-facing names by editing their user accounts in response to this unmasking.)

The reason this is important to our city is that, up until now, the comments section has been fertile ground for conspiracy theories, baseless accusations, and hateful comments. A perfect example of the kind of trouble that has been stirred up can be seen in this article and comments section below, dealing with the Stork investigations.