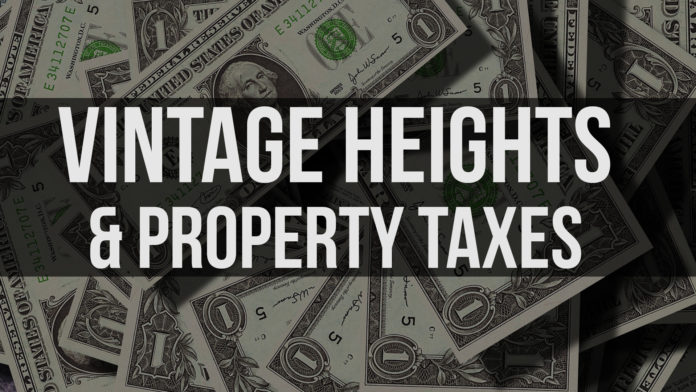 City Council recently took the first steps toward approval of the Vintage Heights residential development along Highway 16, south of Riverhill. During Tuesday’s meeting, council approved “deal points” that included various concessions by the developer — such as leaving streets into Riverhill disconnected. The city agreed to provide a 45% tax rebate to the developer capped at $5 million over a period of twenty years.

Go “in depth” with our article that previewed Tuesday night’s meeting.

As mentioned on Tuesday night, the tax implications are not the only part of the financial picture. In addition to the changes in tax revenue, these 500 homes would also pay for city utilities, providing revenue to the water and sewer fund, and permitting fees and other construction-related revenue would flow into the city’s coffers. The community would benefit thanks to the work that would flow to local contractors, commissions paid to real estate agents/brokers, and other direct and indirect benefits to the local economy, such as an increase in sales tax revenues that new residents would be paying.

There are financial costs, too. Although the developer is paying to construct the streets and utilities, the city will have to maintain that infrastructure going forward. And a growing population requires more services and more staff to accommodate the larger population, such as police and fire personnel, administrative staff, etc. Other entities pay little to no cost but see tremendous benefits, such as Kerr County. And entities like KISD will see a huge increase in revenue, but may need to provide additional teachers, and someday maybe even another school to support the increase in student populations over time.

The economic impact of a development like this one is huge. This article aims to tackle just one part of that impact — property taxes. Let’s examine how the rebate will work and what impact the development of this property will have on local taxing entities.

Please note that for our purposes today, we’re going to operate under a few assumptions that are not “real world,” but they help us simplify the explanation. Once we understand the basics, we can start adding complexity such as the changes in values over time, the various tax scenarios that could change things, and much more. But for now, here are our assumptions:

The developer owns three parcels of land, according to the KCAD rolls, identified by their Property ID numbers 65254, 14612, and 535390, totaling about 225 acres of land. These three parcels all have agricultural exemptions, which drastically reduce the property taxes that the owner must pay. In fact, the total taxes assessed for the city, the county, and the school district in 2019 for these parcels was about $298. That’s right… less than three hundred dollars. See the breakdown below.

Let’s consider the total taxes that the owner would pay over 20 years if the land remained undeveloped. We’ll take our numbers and multiply them by 20, and we get the chart below.

As you can see, over 20 years with the current exemptions, this property owner would pay about $1,446 to the city, $1,379 to the county, $3,132 to KISD, for a grand total of just under $6,000 in tax over those 20 years. Not a whole lot of revenue for any of these three entities because of the agricultural exemption that is in place.

We know that in the real world, it will take many years before all 500 homes are built and sold. And in the real world, the sales prices will vary from about $180,000 up to about $227,000, and those prices may increase as years go by thanks to inflation and other factors. But for our model, which is a conservative one, we’re going to assume that the builder finishes and sells all 500 homes in year one. Not a realistic scenario, of course, but one that illustrates the tax implications in a way that’s easy to understand.

So, on year one, the developer sells all 500 homes. The property is no longer ag exempt, and since major improvements have been made, the taxable value has increased — by a lot. If we take an average value of $200,000 per home and apply that times a factor of 500, we get a new property valuation of about $100 million — up from $13,385 the year before.

When we apply the ad valorem tax rates for the City of Kerrville, Kerr County, and KISD, we can see the following revenue projections taking shape. These amounts are the total tax revenues per year.

In year one of our model, the city would bring in about half a million, the county half a million, and KISD about $1.2 million. This is a huge jump from the prior year when the land was undeveloped, of course. Each individual taxpayer would be paying about $4,450 per year in taxes (on average) to these three entities.

Let’s apply these numbers to a 20-year projection. We can see that we have big revenue numbers over the course of 20 years.

The city has brought in nearly $11 million, $10 million for the county, and about $23 million for KISD. The individual homeowner has paid nearly $90,000 in taxes.

The city has agreed to pay the developer 45% of the property tax revenue that the city receives once a house is built and sold under the $227k target. This arrangement is good for up to 20 years, and is capped at $5 million. In our scenario, again, we’re assuming that all houses are built and sold in year one, and that all of the sales meet the criteria that the city has laid out in the deal points.

Here’s how it works… Our hypothetical homeowner that has just purchased a house in Vintage Heights starts paying taxes. She will pay about $1,080 per year to the city, $1,030 to the county, and $2,340 to the school district. The city will only rebate their portion of those taxes, so the city writes the developer a check for $486.

If you multiply this times 500, for all the homes in the subdivision, we see the breakdown below.

Over 20 years, the developer has received about $5 million, as per the agreement, and the city has benefited to the tune of nearly $6 million. At this point, the city is no longer obligated to rebate the developer, so all of the tax revenue after year 20 will flow to the city’s coffers.

So over those 20 years, all of the taxing entities have benefited greatly. They are far, far better off than they would be if the property had remained an undeveloped agricultural piece of land. But how much better off are they? Let’s go to our last chart.

In our overly simplistic scenario, we can take the “gross” tax revenue and subtract the rebates that the city gave back, and subtract the 20-year revenue projection for the ag property remaining undeveloped, and we see a net change in position for each entity.

The city is better off by nearly $6 million; the county is better off by about $9.6 million, and Kerrville ISD has benefited to the tune of over $23 million. This net change in position reflects how much better off each entity would be versus leaving the property completely undeveloped.

Additionally, it’s important to point out that the city is not required to pay for any infrastructure or major additional services to support this subdivision. The developer will pay to construct all of the streets, water lines, and sewer lines, as well as utilities like electric and phone. The city has no plans to build additional infrastructure for any of these services, no new fire station, and no new police station. Yes, there will likely be additional staff and resources used by the city to support these new residents, but no major up-front costs to the city.

Obviously our model is not completely realistic compared to what will happen in the real world. Lots of factors will complicate the math, including:

Regardless of those complicated variables, this simple model is in the ballpark and helps us understand how this will work, and how the taxing entities benefit, even after considering the rebates.

The taxing entities are better off, financially, thanks to this development. Is this the best possible option out of a universe of infinite options? In other words, would another development be just as beneficial but not have the drawbacks, as some see them? Would a development like this one in another location be just as beneficial? Would another developer move ahead without the rebates and still keep prices low? Of course we will never know the answers to these hypothetical questions. But we do know that this situation that was approved on Tuesday will improve the bottom lines for the city, the county, and the schools.

For the rest of us

You might be thinking, “This all sounds great for the city, county, and schools. But what about me? What about my taxes? What will change?”

The answer that you don’t want to hear, but is honest, is that “it depends.” It depends on several factors that are just too hard to accurately predict with the information we have right now.

But the good news for you, Mr. or Mrs. Taxpayer That Lives Outside of Vintage Heights, is that a growing tax base is good for all taxpayers, in theory. When the tax burden is shared among a larger group of taxpayers, we all see a little bit of relief. Since the city’s costs to support this new community increase only slightly, the tax burden on the rest of us is eased.

Here are some of the factors to consider when forecasting what this growing tax base will do for other taxpayers in town:

Of course, as we’ve mentioned, there are costs to the community and to the taxing entities that we’ve highlighted. Administrative and staffing costs to support a larger population, such as more policing and fire protection, are a couple of examples. And there will be more miles of roadway to maintain, more water and sewer lines to repair and keep in check. Schools may need additional teachers, aides, and admin staff. A growing population may eventually require a new school. So there are numerous economic costs associated with this type of expansion. But examining the net change in position of each of these entities over 20 years, and considering the indirect economic benefits, it’s clear that the advantages outweigh the costs.

The scenario that we’ve outlined here is based on a rosy economic forecast for Kerrville and the nation. In an economic downturn, lots could change. If Kerrville was no longer an attractive place to live, either because of internal or external factors, the demand for housing could lag. Sales tax and ad valorem tax revenues could fall. We could find ourselves with excess supply of housing, which would change all of the financial models and forecasts. These are always the risks that are present and unpredictable.

To hedge against these potential pitfalls, the city must remain vigilant in promoting Kerrville as a desirable place to live and work. We must continue to ensure that Kerrville is attractive to businesses and residents alike, as well as to tourists and visitors and retirees.

When the proposed development agreement is finalized, we will have more hard numbers to plug into these equations, and the city will likely have more realistic forecasts for the tax rebates. The City Council meets again on January 28 for a second and final reading of the zoning ordinance, and to consider the first draft of the development agreement.