Kerrville’s recently approved Comprehensive Plan (Kerrville 2050) calls for numerous steps to be taken to revitalize and enhance our downtown. Several studies were pointed to in the plan that conclude that a vibrant downtown contributes to a thriving community.

In order to achieve the goal of a vibrant downtown, funding sources must be created or identified to make those objectives a reality. One such plan to set aside revenue for revitalization is the proposed TIRZ (Tax Increment Reinvestment Zone). According to the State Comptroller’s office, approximately 313 TIRZs have been created around the state, but the number may be much higher, since not all communities report their TIRZ zones to the comptroller. The goal is to set aside “incremental revenues” for specific types of projects that would benefit the downtown area.

Please see our video that explains what a TIRZ is and how it will benefit Kerrville. All of our source material and citations are linked in the bullet points below.

Additional information is available in the extended article below:

The City Council meeting on Tuesday, September 11, focused on several important topics including a proposed “Tax Increment Reinvestment Zone” incorporating all of downtown Kerrville. The proposed ordinance passed with a 3-1 vote of the council, with Blackburn, Eychner, and Sigerman voting in the affirmative, and George Baroody voting “no.” Vincent Voelkel recused himself citing a possible conflict of interest — his father owns property within this designated zone. 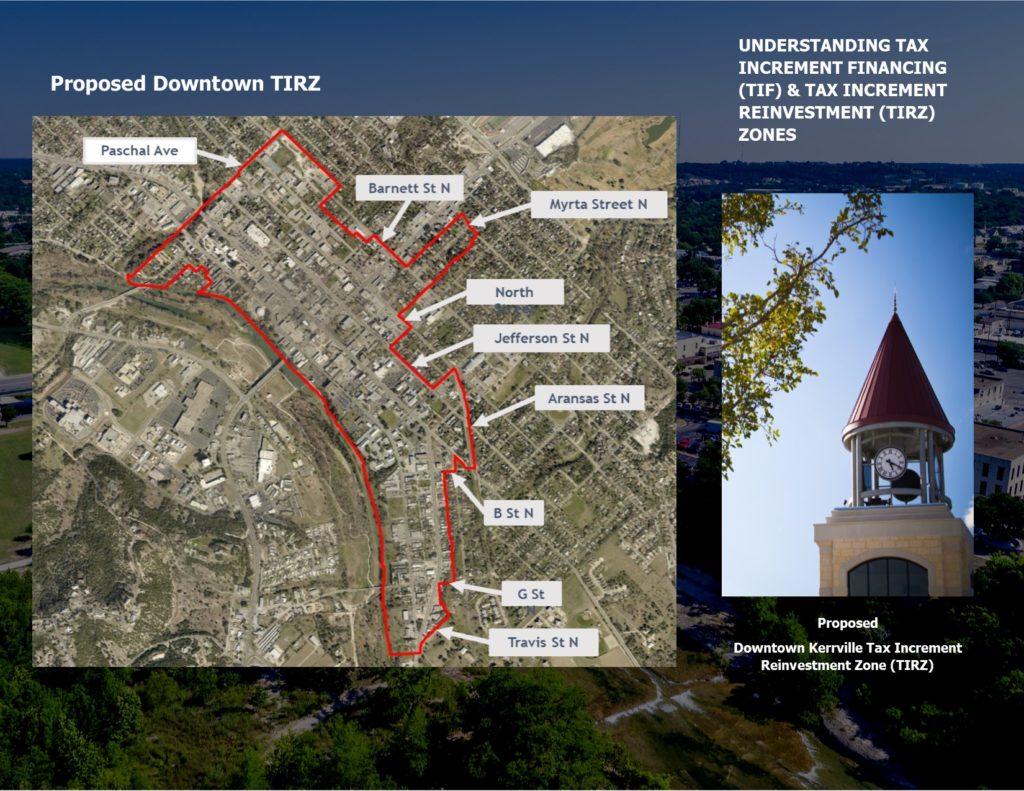 Council chambers hosted a lively discussion between Baroody and the city’s consultant, but a lot of misinformation and confusion was also spread. Let’s dig down into this TIRZ business and see what it’s really about.

This TIRZ proposal comes in response to and in coordination with the city’s Kerrville 2050 Comprehensive Plan. This plan, which was created with input from hundreds of citizens over the course of dozens of meetings over nine months, prioritizes the improvement of and reinvestment in our downtown. Establishing a TIRZ is a concrete step toward that goal. The TIRZ will provide a funding mechanism to carry out the mandate created in the comprehensive plan.

So, what is a Tax Increment Reinvestment Zone, or TIRZ? Let’s start with a quick review of how the city collects money to do its jobs. As you’ll remember from our previous videos, the city gets its revenue from three primary sources: property tax (also known as ad valorem taxes), sales tax, and service revenue. Property tax is assessed on all taxable properties within the city limits. In the 2018 budget, the city plans to receive about $10.9 million in property taxes, or about 19% of its total revenue.

When a TIRZ is implemented, this is what happens… The city draws an imaginary line around a certain area of town, and they take note of the total tax revenues that are currently coming in from the property owners within that zone. That’s called the “snapshot” of today’s revenues for that zone. After the TIRZ is approved, any “extra” money above the snapshot amount is applied to a special fund. The tax rate doesn’t change at all, so there are no new taxes being applied to these property owners. But through natural appreciation of values, plus the appreciation that happens when new buildings are built or remodeled, the revenues from that zone start to naturally increase. So everything before the snapshot still goes to the city’s general fund, but all of the extra (or “incremental”) revenues from that zone go into a special fund called the TIF, or Tax Increment Financing fund.

Here are a few other facts to remember… A TIRZ does NOT affect the tax rate within the zone — it has no impact on the taxes you pay if you own property within this zone. The TIRZ does NOT change the zoning requirements within the zone. All it really does is say, ok, for all the dollars we collect over and above the snapshot amount, we’re going to apply those to a new economic development plan WITHIN that zone. The goal of these projects is to revitalize the area in the zone, which is Kerrville’s downtown, thus supporting the mission set forth in the Comprehensive Plan.

How common is this type of funding mechanism? According to the State Comptroller’s office, approximately 313 TIRZs have been created around the state, but the number may be much higher, since not all communities report their TIRZ zones to the comptroller.

Another reality to keep in mind about this funding mechanism is that it grows very slowly. The real benefits of this program may not be realized for another decade or more because of the incremental nature of the growth of the fund. The duration of this TIRZ is proposed to be thirty years, and projections show that the fund won’t even surpass a million dollars in annual revenue until at least 2027. By nature, this is a method of accumulating funding over a long period of time without incurring any debt, and without increasing the tax rate.

In addition to serving as a piggy bank to fund long-term economic development in the downtown area, the very establishment of a TIRZ is attractive to potential developers that want to invest in the downtown area. This type of funding mechanism tells potential developers that Kerrville is committed to the ongoing revitalization and improvement of our downtown, making Kerrville an even more attractive place to invest.

So what does the TIF money get used for specifically? The Texas State Legislature sets out the rules for this in Chapter 311 of the Tax Code. Projects can include roads, sidewalks, public infrastructure, demolition, building facade preservation, affordable housing, school buildings, and a few other public good projects. In Kerrville’s case, the plan includes a mixture of the following:

The estimates shown here are just that — estimates. The city has said that these amounts and percentages may be revised in the future.

One question that has been raised is this: Why aren’t there more specific plans so that we can understand what types of projects will actually be implemented with this TIF money? The city’s consultant, Mr. David Pettit, answered that question in the council meeting on September 11.

Another term that’s been thrown around during this discussion is “eminent domain.” What role does eminent domain play in a TIRZ and TIF? The correct answer is that there is no additional threat of eminent domain under a TIRZ. You see, the city council ALWAYS has the ability to invoke eminent domain if they so choose. Adding a TIRZ does not increase that constitutional authority in any way. The bottom line here is that a TIRZ has nothing to do with eminent domain — it neither increases or decreases the ability of a city to use eminent domain.

And finally, many opponents of the TIRZ ask, “What’s the rush? Why now? Why can’t we study this further and wait to pass it after it’s been more thoroughly vetted?” The reason we should act quickly is because if we pass this TIRZ this calendar year, the “snapshot” is set at the beginning of 2018. Why does that matter? Well, the snapshot is the basis for how much money can be collected for the TIF. If we wait another year or another two years, all of that natural appreciation money is not being collected and saved for downtown revitalization. If a large building is constructed or if land values appreciate considerably, we would miss those gains and not have access to those funds for downtown enhancement or economic development. Also, as City Manager Mark McDaniel stated at the last regular city council meeting, there is no risk in implementing this now.

In summary, we believe that the Tax Increment Reinvestment Zone is a positive step in the right direction for Kerrville. During the Comprehensive Plan process, the citizens stated that downtown revitalization is a priority, and this TIRZ is a step in that direction. Without a funding mechanism, there is little that can be done to help achieve the goal of a vibrant downtown. But with the TIRZ in place, existing taxes will be used more effectively toward this goal. We encourage council members and voters to support the TIRZ.