This morning on Facebook, one voter gave her testimonial about an encounter with a Bonnie White supporter outside of the polling place yesterday afternoon. In the post, Sara Evans, a Kerrville resident, explains that she took her two children with her to the Cailloux Theater, and the three of them went inside to vote. (Children are encouraged to fill out a sample ballot to learn about the democratic process.) Outside, she was approached by a White supporter that made her and her children feel threatened, and caused her children to cry, they were so upset. Read her story here: 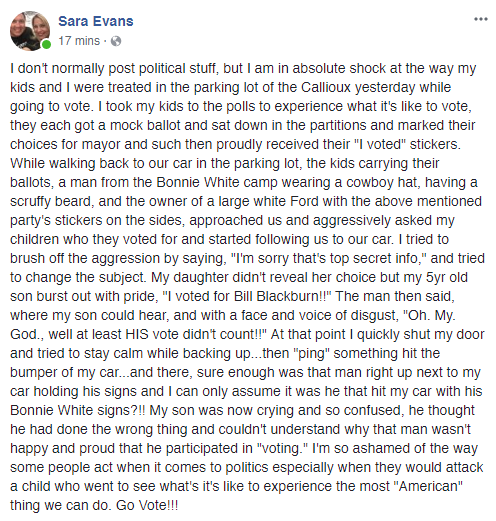 Mayor White’s husband, Robert White, is known to sit in the parking lot of the polling place most days. He drives a white pickup truck, wears a hat, and has a salt and pepper beard. Mrs. Evans was shown a picture of Robert White, and she believes this was the person that harassed her.

This report comes on the heels of another alleged encounter between Robert White and another female voter leaving the polls last week. Courtney Barton had this to say about her experience with Mr. White in the parking lot:

We await comment and/or a statement from the Whites about these reports. We are happy to update this post as we gather new information.

Approximately one year ago, an article appeared in the Hill Country Community Journal outlining some other instances of troubling behavior on the part of Mr. White. Please see this article for a detailed explanation of other behavior perceived as threatening, intimidating, or bullying. 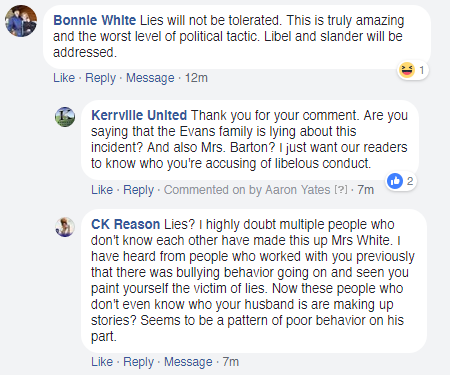