Almost a year ago, the Kerrville City Council was shaken up by the 2017 election. Two new councilmembers were sworn in: Vincent Voelkel and George Baroody. Together with Mayor Bonnie White, this three-person majority began making sweeping changes to the way the council and its boards work, and made changes to the makeup of those boards. For example, in one of the very first meetings of the new council, the White majority removed a member of the Economic Improvement Corporation that was eligible to serve an additional two-year term, and also replaced the city council liaison to the EIC with newly elected councilman George Baroody.

Mr. Baroody, from his chair on the EIC board, was dismissive of the efforts of the Kerr Economic Development Corporation, or KEDC, an private nonprofit corporation made up of representatives from the City of Kerrville, Kerr County, and other stakeholders. The KEDC is a “one stop shop” for economic development, interfacing with businesses and investors to assist them with incentives from the various government agencies. Also, importantly, the KEDC is not a government entity, per se, and therefore they are not subject to open records requests, which allows them to maintain the privacy and confidentiality that these businesses need when negotiating new business deals. The KEDC is funded primarily from EIC funds.

In one meeting last year, Mr. Baroody even went so far as to suggest that the KEDC should be closed down entirely and its functions brought in-house to the City of Kerrville. This comment immediately spurred a backlash from community leaders and KEDC supporters, and the idea was spiked. But that comment caused widespread confusion and concern, and led to the immediate resignation of one of KEDC’s employees. Then, months later, led to the resignation of the Executive Director of the KEDC, Brian O’Conner.

The current council majority continued to be critical of the KEDC, attempting to reduce its budget, and challenging the corporation over the role it has played in economic development over the past few years. Baroody and White have been especially skeptical of the role of the KEDC, and have questioned whether or not the entity is even necessary, and whether or not the city is getting a good return on its investment.

So, recently, the KEDC hired an independent firm to evaluate its impact on the local economy. Impact DataSource, an Austin-based consultant group, evaluated the role of the KEDC over the past four years on four specific projects: Mooney International, Fox Tank, James Avery, and Nature Blinds. Their findings are surprising and impressive.

These four projects pumped over $1.4 billion into the local economy, and added a total of 672 jobs, directly and indirectly. The total workers’ earnings created by these projects over the past four years is a whopping $89.3 million. 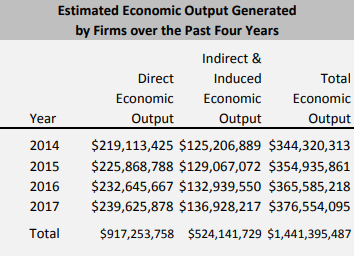 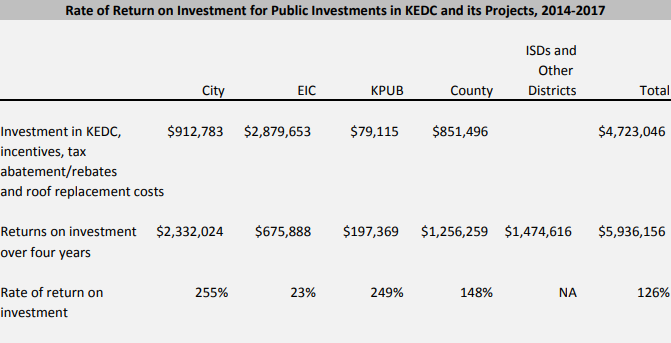 Although the report does not state the KEDC alone was the sole driving force behind these projects, the consultants do state emphatically that the KEDC is critical to a good economic development program:

“…Impact DataSource believes that such one‐stop center for economic development services is critical to a community’s economic growth and many of these investments may not have occurred without the efforts of KEDC.”

Read the full report via the City of Kerrville’s web page at this link: https://legistarweb-production.s3.amazonaws.com/uploads/attachment/pdf/172135/KEDC_performance_report.pdf