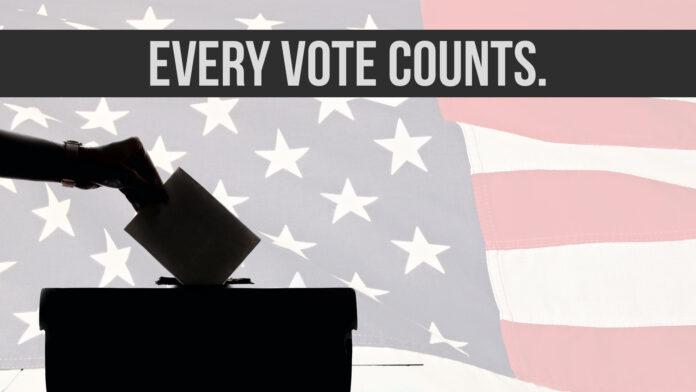 What are some of the tightest margins in local elections in Kerrville and Kerr County? Several elections in recent years have been extremely close, and this illustrates how every single vote matters in these local races. Every. Single. Vote. The last chance to vote in the City Council election is this Saturday at the Cailloux Theater from 7 AM to 7 PM.

Check out these very slim margins of victory from recent years and remember these when you’re deciding whether or not to cast a ballot!

When Rusty Hierholzer announced his retirement, a crowded field emerged to take his place. Five Republican candidates were on the primary ballot in spring 2020. If one candidate did not receive at least 51% of the vote, a runoff would be triggered between the top two vote-getters.

The top three candidates in this race ran extremely close. When the votes were tallied, only 44 votes separated Garcia and Leitha. That’s less than one percentage point! And third place candidate Carol Twiss missed the runoff by only 220 votes out of over 10,000 cast.

Leitha went on to defeat Garcia in the runoff election by a comfortable margin, which might lead us to believe that for most Twiss voters, Leitha was their second choice. Could ranked choice voting have prevented the need for a runoff? Food for thought.

Kerr County hasn’t elected a Democrat or an Independent to the Commissioners Court in decades, so the Republican Primary is, for all intents and purposes, the only election that matters for this elected body. In 2018, Bob Reeves, who was initially appointed to fill the seat left vacant by the death of Bruce Oehler in 2014, and then won his own term later that year, was on the ballot again.

Challenger Don Harris, a former Ingram ISD teacher, was ahead by a margin of only FOUR votes. Four — not forty. That’s a 1/10th of one percent margin.

Later, after a recount was triggered, it was discovered that Harris actually won by only THREE votes! Harris received 1,062 votes compared with 1,059 for Reeves. THREE votes out of over 2,000 cast.

Incumbent Stephen Fine, who had previously served as Mayor of Kerrville, faced off against challenger Vincent Voelkel, a newcomer to politics. This was the only competitive race on the ballot in this municipal-only election. With a 14% turnout, Voelkel was elected to City Council by a margin of 154 votes — about an eight point margin in this race.

Voelkel’s victory established the White majority on council, with Voelkel, Baroody, and White teaming up to dominate city politics in 2017 and early 2018.

When long-time Commissioner Buster Baldwin announced his retirement, a crowded field vied to replace him. Again, with the Republican Primary being the deciding election for county commissioners, this was the race that mattered. Five candidates campaigned for the seat, but only two candidates received a substantial portion of the votes in the primary.

Dr. William Rector and Harley Belew were the top two vote-getters, and Rector had a margin of 235 votes over Belew on that first ballot. But a runoff would ensue, and two months later, Belew came out on top with a margin of only 39 votes — or about two percentage points!

One of the important lessons here is that many voters won’t show up for a runoff election. You’ll notice that 3,300 people participated in the primary vote, but only 1,500 voted in the runoff.

Bonnie White was serving as Place Two City Councilmember (having soundly defeated Stacie Keeble in 2015) when she threw her hat in the ring for the mayor’s race. Incumbent Mayor Jack Pratt decided not to seek another term, but Glenn Andrew challenged White for the position. That year, with an 18% voter turnout, White defeated Andrew by only 187 votes — about six percentage points.

This election changed the course of Kerrville history, ushering in the divisive and polarized era of politics that we find ourselves in today.

Back when Kerrville city politics were much less polarizing, Gary Stork defeated Sherri Jones by a margin of only 26 votes — about one percentage point!

On this ballot that included races for Mayor, Place 3, Place 4, as well as KISD school board, only nine percent of voters turned out. Challenger Jack Pratt defeated incumbent Mayor David Wampler 888-863 — a margin of only 25 votes!

As we can see, these local elections can be extremely close. Every vote matters. Bad weather or other externalities can affect the turnout during early voting or on election day, and these small variables can swing a vote and change history. This year, make sure your voice is heard by casting a ballot on Saturday, May 1, for Kerrville City Council Place One.

All election tallies were gathered from the Kerr County Elections website.