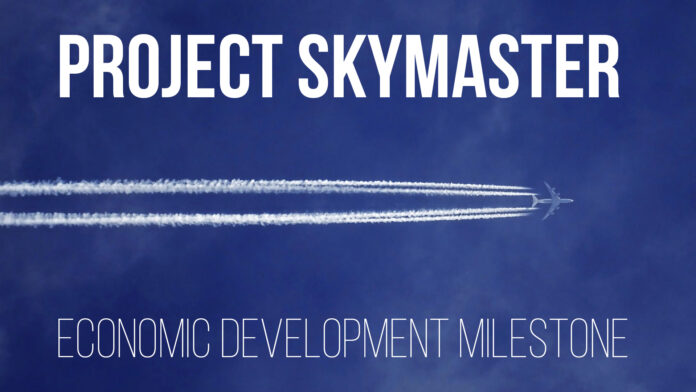 Earlier this month, the City of Kerrville along with its State of Texas partners announced the details of “Project Skymaster,” which is a landmark economic development achievement for Kerrville and surrounding communities. The code name “Skymaster” was used on public-facing documents and agendas for more than a year as community leaders worked behind the scenes to negotiate and secure an agreement with Killdeer Mountain Manufacturing (KMM) that will supply 400 jobs to Kerrville over the next 25 years. The city’s joint press conference is available below, and additional information and details are presented below the fold.

DISCLOSURE: Your author, Aaron Yates, is a member of Kerrville’s Economic Improvement Corporation (EIC) which is one of the funding mechanisms for this economic development agreement. Aaron’s private business, KerrvillePhoto.com, provided videography services to broadcast the press conference embedded above.

Summarizing the top-level headlines of this agreement:

The City’s contributions and incentives are explained by City Manager Mark McDaniel at minute 33 of the video below.

According to the agreement (which is still being drafted for consideration by City Council), KMM will add at least 400 jobs in Kerrville over the next 25 years. All of the financial incentives offered by the City/EIC are tied to that “specific performance” — job creation. And at least 60% of those jobs must include Kerr County residents. The annual wages for these jobs will be at least $42,000. (For comparison, a first-year teacher in local districts starts at approximately this same wage.)

Those 400 jobs will be created over the course of 25 years, and the agreement requires a certain number of jobs to be online each year. That outline is as follows:

Where, exactly, does this money come from? Contrary to a popular misconception, 4B revenues are not raised through property taxes. These funds are raised through a 0.5% sales tax on taxable purchases within the city limits of Kerrville (and on other taxable sales that originate in Kerrville, such as mail-order manufacturing sales from companies like James Avery). This tax was voted into law by local residents in the 1990s and the EIC has contributed approximately $55 million in funding for various projects over the past 20 years, including recent contributions to fund the River Trail, Doyle Community Center, Arcadia Theater, Legion Lift Station, Sports Complex, and many more. The EIC’s annual revenue in recent years is approximately $3 million.

Over those past 20 years, the majority of EIC funds went toward “quality of life” economic improvements, such as the River Trail and Sports Complex. While these projects objectively improve our local economic picture, they do not necessary provide a measurable link to actual job creation. Only two recent projects can be fairly described as direct job creation funding agreements: Fox Tank and James Avery in 2012 and 2015, respectively.

Financial incentives from the State of Texas and local entities certainly helped entice Killdeer Mountain Manufacturing to bring this facility and these jobs to Kerrville. In addition, a number of other factors influenced the company’s decision to expand to our community.

Landing this huge deal was a tremendous accomplishment for the negotiators, including city staff, KEDC, EIC, and other stakeholders. As numerous observers have stated, this is a once-in-a-half-century (or longer) type of deal for a city our size. While some of the benefits will take time to visualize, the potential upside for Kerrville is practically unlimited. We get good jobs, a quality employer and taxpayer, and residual benefits such as additional suppliers that may locate in Kerrville, bringing new jobs with them. Also, residual benefits that are referred to as the “multiplier effect,” adding to the local economy.

Financial incentives are always controversial when applied to private corporate interests, but they are part of the landscape of economic development, and must be viewed as an investment in the future of our city, and an investment in our workforce. And as financial incentives go, this deal is a win for the City and its taxpayers. There will be NO ad valorem or personal property tax abatements, meaning KMM will immediately start contributing to the city, county, and school district tax revenues. And the majority of the funding comes from a source that MUST be spent on economic development — by law. By providing these incentives, our community was able to leverage nearly $1.8 million in state funds to help secure this deal — a windfall for this community.

The Economic Improvement Corporation (EIC) and City Council will now hold public hearings and public votes to consider the final agreements. Watch for agendas to find out when and how the various aspects of this agreement will be debated. Public input will be welcomed during this due diligence period.