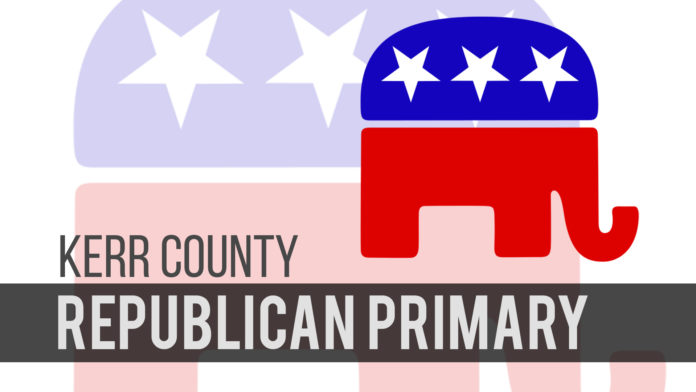 Republican voter turnout decreased in 2020 compared to the same election in 2016. Of the 36,127 registered voters in Kerr County (of all parties), approximately 10,505 voters cast a ballot in the Republican Primary in Kerr County in 2020, compared to approximately 12,257 voters who participated in 2016. The lack of a competitive presidential race may have contributed to the decrease, although several important local races were on the ballot.

Here are some of our takeaways from the 2020 Republican Primary electorate. A similar analysis of Democratic Party turnout will follow in a future article.

Turnout declined in 2020 compared to the 2016 Republican primary election — total votes were down approximately 14%. However, the number of ballots cast was much higher than in 2012.

Precinct 4 continued to have the highest number of voters participating in a primary election. Precinct 3 had the smallest number of ballots cast by precinct.

The average voter age in this election was 64 (compared to 63 years of age average in 2016 — the electorate is aging slightly). The oldest voter was a resident of Comanche Trace who was 100 years old on election day. Here is the breakdown of the age groups. As you can see, voters between the ages of 51 and 80 make up approximately 71% of the voters.

Another way to look at the age of voters is in a histogram. This chart shows the quantity of voters according to their age.

Women make up about 52% of voters that reported their gender on voter registration forms. This is up from 51% that reported as female in 2016 — the electorate is made up of slightly more females than males.

Voters that self-reported as Hispanic make up only about 6% of the Republican voters. This is up slightly from 2016, when only 5% reported as being of Hispanic descent.

In this election, about 60% of voters either voted by mail or in early voting. About 40% of the votes were cast on election day. This is a pretty big deviation from 2016, when only about 51% of voters voted early or by mail. Also, mail-in ballots are sharply down from 2016. Four years ago, about 1,059 voters voted by mail, whereas only 202 mail-in ballots were counted in 2020.

Most voters (about 60%) lived in the county (outside of the municipal limits of Kerrville or Ingram). This is a slightly higher percentage of rural voters than 2016, when only about 57% lived outside a municipality.

Republican voters will have a chance to participate in a runoff election in May. Early voting begins on May 18 and Runoff Election Day is on May 26. The runoff for Kerr County Sheriff will appear on this ballot and voters will decide between Eli Garcia and Larry Leitha — the top two finalists in a field of five Republican sheriff candidates that appeared on the March 3 primary ballot.

This information was compiled from voter rolls and turnout data as received from the Kerr County Elections Department. This information is public record and can be retrieved by request at that office.