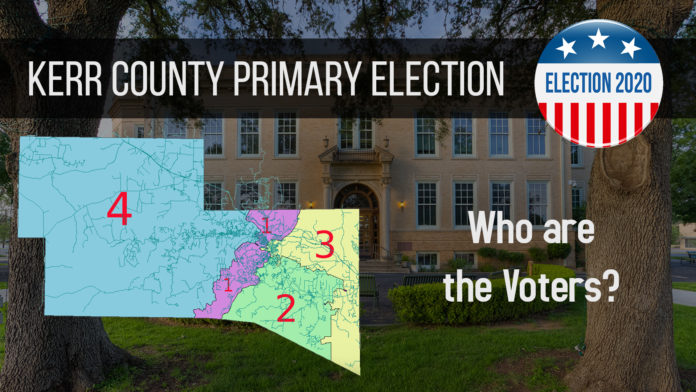 As Kerr County voters prepare to go to the polls on Tuesday, what kind of turnout numbers can we expect in this election? Who votes? How old are they? Where do they live? Although we can’t predict the future, we can look back at the 2016 turnout data to draw some interesting conclusions about the voters in each party.

Early voting begins on Tuesday across the state of Texas and in Kerr County, of course, at two locations in our county: Cailloux Theater in Kerrville and West Kerr County Annex in Ingram.

Almost 14,000 voters participated in the 2016 primary elections (including D’s and R’s) out of about 35,000 registered voters (a turnout of roughly 40%). Here are some of the other takeaways from the 2016 Primary Election.

The vast majority of voters in our county cast a ballot in the Republican Party Primary. In 2016, there were approximately 12,259 ballots cast in that party’s primary election. A plurality of voters cast their ballot on election day, but a majority of voters either chose to vote early or by absentee ballot. See the chart below.

The ballots cast by precinct are not equal. As you can see in the chart below, the largest number of ballots were cast in Precinct 1, followed by Precincts 4 and 2. But Precinct 3 lagged far behind, with just over 2,000 ballots cast.

In 2016, the average Republican primary voter was 63 years old. About two-thirds of voters were age 60 or above. The largest age group was voters between the age of 61 and 70 years.

If every registered voter actually cast a ballot, it would take every single voter aged 60 and under to achieve a majority. That is, there are equal numbers of registered voters under 60 as there are over 60 in Kerr County.

There is a much smaller number of Democratic Party voters for primary elections in Kerr County. In 2016, approximately 1,739 Democrats cast a ballot — about one-seventh of the Republican turnout. This doesn’t necessarily mean that there are only 1,739 Democrats in Kerr County, though. Many Democrats vote in the Republican primary because so many races have no Democratic challenger. So the only opportunity many Democrats have to make their voice heard in local races is to vote in the Republican primary. Several local races are examples of that in 2020, including Tax Assessor/Collector, and Constable Precinct 4, and for all intents and purposes, the Sheriff race, too.

The average age of a Democratic primary voter in 2016 was 61. This means that Democrats, on average, are slightly younger than Republicans in Kerr County (their party’s average was 63 years of age). About two-thirds of all Democratic voters are aged 60 and above.

We relied on voter registration and voter rolls data provided by the Kerr County Elections office from 2016 to the present. This information is not available online, but is a public record available at the courthouse.