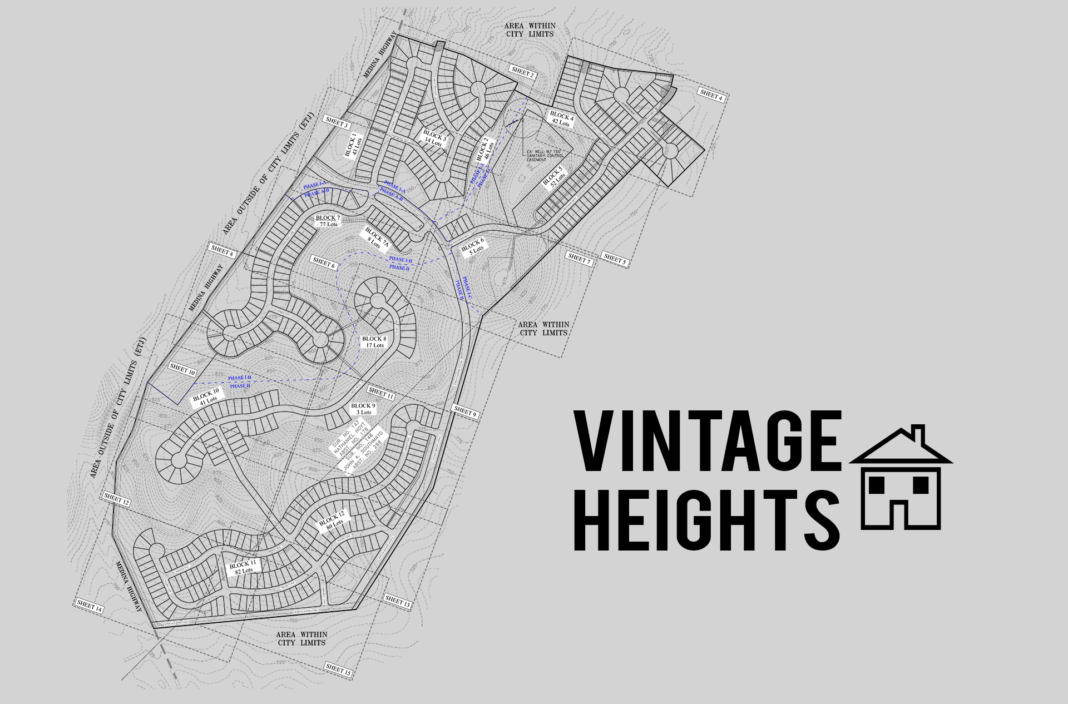 The City of Kerrville’s Planning & Zoning Commission will hear a proposal regarding Vintage Heights, a proposed 510-lot subdivision just south of Riverhill. Thursday’s hearing includes a request for rezoning and approval of a preliminary plat.

The Planning & Zoning Commission is a seven-member board appointed by the Kerrville City Council which considers proposals for zoning, platting, annexations, variances, sign regulations, and other matters related to development in the City and surrounding extra-territorial jurisdiction (ETJ).

The P&Z will hear this proposal against the backdrop of Kerrville’s housing crisis. Along with much of the country, Kerrville home prices continue to rise at twice the rate of wage growth, and simultaneously, the demand for housing has outstripped the supply of affordable homes in Kerrville. (Ref.: Keeping Up with Kerrville, July 5, 2019)

The issue of housing came up more often than any other during the election campaigns of 2018 and 2019, and in response, Council launched a Task Force on Workforce Housing consisting of builders, real estate professionals, and residents. The task force guided the creation of the “Kerrville Housing Study and Strategic Plan 2019,” a document that laid out the challenges and potential remedies for the shortage of affordable housing in our community.

With at least 300 new jobs coming to Kerrville over the next few years, the shortage could become even worse. The study concluded that if new housing options are not constructed in the near term, the gap between the supply and demand for housing will force these new job-takers to seek housing outside of the city or even outside of Kerr County, causing our community to miss out on the full economic benefit of all those new jobs. When workers reside outside of our community (commuters), our local taxing entities don’t get the benefit of their output. We lose revenue in the form of property taxes and sales taxes, and we lose out on other benefits of residency, such as governmental representation, grants, and so much more.

Kerrville’s median income is approximately $46,215 per year, but the largest group of households (about 18%) earn between $35,000 and $50,000, putting much of the existing housing units out of reach financially. And currently, more than one out of every four households in Kerrville spends more than 30% of its income on housing expenses — a situation that’s known as a “cost-burdened” household.

One remedy discussed in the Kerrville 2050 Comprehensive Plan and in the housing study involves allowing for higher-density dwellings including townhomes, duplexes, and smaller lots — all designed to offset the high cost of land associated with creating new residential developments. The newly revised Zoning Code, adopted in 2019, made several changes to allow for increased density in certain zones.

Request to Change Zoning & Land Use

The first topic that the P&Z will discuss on Thursday is a request to change the zoning and land use plan for the 225-acre parcel. The requested zoning change would be from R-1 (Single Family District) to R-2 (Medium Density Residential), and the land use would change from “Agriculture and Outdoor Tourism” to “Preservation Residential.”

The change from R-1 to R-2 within the umbrella of “Preservation Residential” land use would allow for increased density and smaller lots sizes. According to the zoning code, the purpose of the R-2 zone is to allow for patio homes, townhomes, and duplexes in addition to single-family detached homes. See the comparison of selected regulations in each zoning district in the chart below.

According to the report prepared by city staff, the development will have minimal impact on the thoroughfare plan, traffic patterns, or parking. Staff has recommended approval of the requested zoning and land use changes.

A preliminary plat is one of the first regulatory hurdles that must be cleared for a new development to get off the ground. At this stage, the developer must meet many administrative and statutory requirements and must submit a proposed layout of the lots, streets, and utilities. At this stage, many of the specific details of the layout are subject to change, but the overall vision is presented to P&Z for comment and approval or denial.

The preliminary plat submitted for approval showcases a development plan that consists of several cul-de-sac streets and a few connecting streets that move traffic through the subdivision to the various home sites. In addition, a large portion of the 185 acres being platted at this time will be left as open space. Looking closely at the topography, the home sites are generally located on the flatter hilltops or gently sloping hillsides, and the open space is characterized by steep hillsides and challenging topography.

The subdivision would be accessed by two collector streets on Medina Highway, as well as via connections to the existing Riverhill subdivision. According to staff reports, “Some concern has been brought up by neighboring property owners regarding the level of traffic on Riverhill Boulevard.” However, staff goes on to note that Riverhill Boulevard was designed to be a neighborhood collector street, and the “stub-out” streets facing this new development were indeed intended to be used to access additional neighborhoods to the south, when the time came.

Based on the information provided in the report to P&Z, it’s difficult to determine how this development might impact the housing market in the near term. There are several questions that were not answered in the written documentation, but could be answered during Thursday’s meeting:

The answers to these questions will dictate how the development impacts the housing situation in Kerrville. However, the development, if it proceeds as planned, will certainly increase the supply of available housing units in Kerrville, which is a step in the right direction.

For the preliminary plat portion, the P&Z has the authority to approve it without Council action. Once approved, the developer has one year to come back and submit a final plat, which would basically allow the development to proceed as planned.

Thursday’s meeting will be broadcast live and will later be available on YouTube.