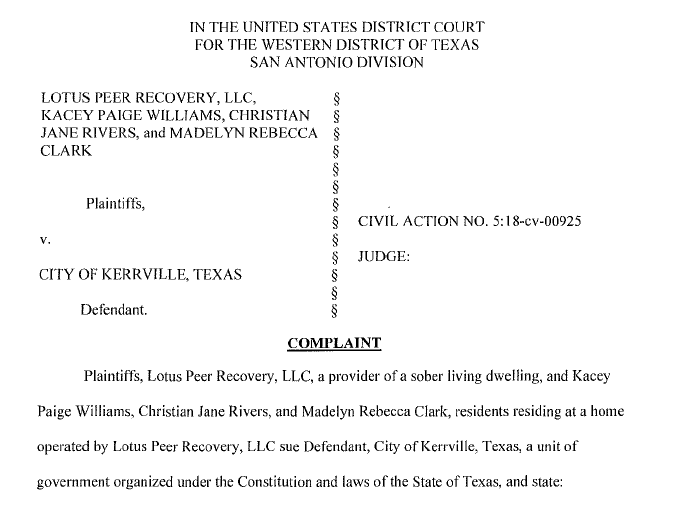 Following the Executive Session portion of Tuesday night’s City Council meeting, councilmembers heard a short statement from City Attorney Mike Hayes and then voted unanimously to approve a settlement agreement for the Lotus Peer Recovery, LLC, lawsuit. This agreement will completely settle the matter that started with a suit filed against the city in September 2018.

On September 6, 2018, Lotus Peer Recovery, LLC, along with named plaintiffs Kacey Paige Williams, Christian Jane Rivers, and Madelyn Rebecca Clark filed a civil action against the City of Kerrville in federal court, claiming that the City discriminated against them on the basis of disability in violation of the Fair Housing Act of 1968. Their suit claimed that the city’s zoning ordinance, which required spacing of one-half mile between sober living homes, intentionally discriminated against disabled persons — persons in recovery.

In late October 2018, one of the attorneys for the plaintiffs, Mr. Patrick O’Fiel, notified City Attorney Mike Hayes that George Baroody, at the time Council Member Place 2, “paid a visit” to his office to discuss the case. This so alarmed Mr. O’Fiel that he felt obligated to inform the other parties in the case.

Subsequently, Baroody was removed as Mayor Pro Tem and was sanctioned to keep him away from all future discussions of the case. After that City Council meeting, Baroody was seen outside City Hall discussing the matter with the plaintiffs in the case.

Baroody later hired an attorney who threatened a lawsuit against the city for removing him from those discussions.

As reported by the Kerrville Daily Times, a bench trial was set for October 21, 2019. Other recovery home operators spoke out about the lawsuit in another Times article published in April.

An agenda item on the November 12 meeting of City Council stated that council would convene in Executive Session to discuss the lawsuit.

Following Executive Session, City Attorney Mike Hayes made a short statement and concluded by saying that he advises the council to approve a settlement agreement that would dismiss the suit.

Council voted unanimously to enter into the settlement agreement. According to the city’s press release, “The settlement agreement essentially provides that Lotus Peer Recovery will immediately dismiss its lawsuit, that each party releases all claims it may have against the other party, that each party is responsible for its own costs, and that Lotus Peer Recovery may not be involved in another similar facility within the City for three years.”

Kerrville City Council on Tuesday voted to authorize Mayor Bill Blackburn to approve a settlement agreement between the City and Lotus Peer Recovery, LLC. Lotus Peer Recovery filed the lawsuit against the City in September 2018, claiming that the City’s boarding home regulations illegally discriminated against persons who wanted to live together in a “group home”. The City believed and continues to believe that its regulations are legal, are based upon health and safety interests, and fairly balance the interests between those owning and operating such homes, the residents of such homes, and the community.

The Lotus Peer Recovery facility that was the subject of the lawsuit has not been in operation for some time.

The City will continue seeking input into the issues raised by the recovery community and those living in group homes, primarily through the consideration and input of its Recovery Coalition Community.