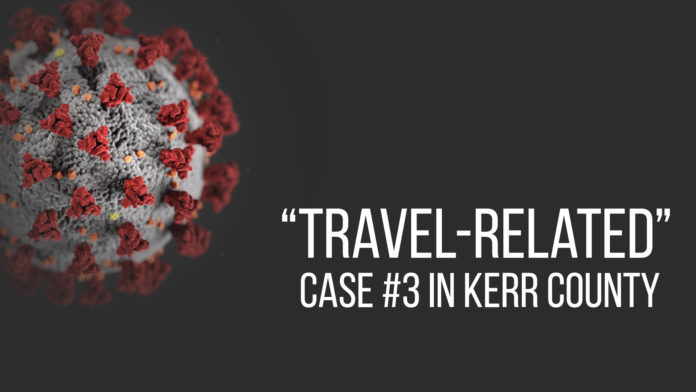 On Tuesday, April 14, Kerr County released a statement confirming that a third person in our community had tested positive for COVID-19 — the coronavirus that has ravaged the United States in recent weeks. The press release revealed that a man had tested positive for the virus after receiving a test provided by his employer, and that the case was likely “travel-related.” County Judge Rob Kelly seemed to suggest that this person might have been “in our midst” when he stated, via the release:

If there was one asymptomatic carrier in our midst, there very likely could be others… If there is a time that COVID-19 cases will light up our map here, this is it… This is the time we really need to be careful.

Comments on that post and the subsequent shares (which number 114 shares as of this writing) worried that the patient might have infected others. One of the representative comments stated: “This person had no symptoms but is positive therefore been roaming around town asymptomatic. [sic]” Other comments were even more harsh, accusing the patient of being irresponsible or dangerous.

However, that could not be further from the truth, according to the patient himself. Your author, Aaron Yates, spoke to the patient on Wednesday evening. We have withheld his identity and some other details to protect his and his family’s privacy. In this article, we’ll refer to him as “John.”

John did everything right.

Offshore oil rigs, such as the one where John works off the coast of Louisiana, are close quarters. Up to 350 workers can be stationed on an offshore rig like the one pictured below. On John’s rig in early April, about 220 employees were aboard the structure in the Gulf of Mexico.

As is common in the industry, employees typically work for 14 days, and then have 14 days off. During the two weeks aboard the platform, workers sleep in tight quarters with a roommate. Everything is done in close proximity to others, including working, eating, relaxing, and sleeping. This makes it difficult to stop the spread of the virus if it comes aboard.

Oil industry workers are “essential workers,” as classified by the CISA guidance on the essential infrastructure workforce. According to the publication, “Workers supporting the energy sector… who are needed to monitor, operate, engineer, and maintain the reliability, safety, environmental health, and physical and cyber security of the energy system” are essential. Therefore, the offshore oil platforms are still in operation. Americans still need the energy produced by hydrocarbons, even during a pandemic.

According to a spokesperson for the National Ocean Industries Association, in the past two weeks, there have been 11 COVID-19 cases detected in the roughly 15,000 people who work offshore at any given time. The measures put in place to prevent the spread of the virus seem to be working, says Erik Milito, president of the National Ocean Industries Association. “We see what we think are great results. I think that’s due to the seriousness and the commitment we’ve seen [from the oil companies].”

Before signs of any outbreak, one of the ways that John’s company was screening for possible infections was the use of thermal imaging cameras, which detect heat. One of John’s coworkers was picked up by the thermal camera, and did, in fact, have a fever. That very night, the man was flown off the facility by helicopter and placed in quarantine. He later tested positive for COVID-19.

The possible presence of the virus launched the rig personnel and management into action. The company reduced staff to a skeleton crew immediately, reducing the number of workers from 220 down to 70 in a short period of time. The remaining staff, which was left to oversee the safety of the facility, slept one man to one room, rather than the two-to-a-room arrangement during normal times. Either John or his roommate would need to move into another room, so John volunteered. All of the rooms were cleaned and sanitized before the move, but three days later, John learned that the bed he was now sleeping in was previously occupied by someone who tested positive for COVID-19. The first man who was immediately removed after showing signs of fever had unknowingly infected six other men on the platform.

John was completely asymptomatic. He stressed to me multiple times during our conversation that he had no symptoms whatsoever. No cough, no fever, no shortness of breath. Nothing to indicate that he might be ill. Despite most of the crew also being asymptomatic, his employer arranged for tests for all of the workers on those crews that were in proximity to the positive patient. The reality is that energy corporations have the resources and connections to get tests performed. The industry is critical to the energy supply for the United States. Every worker on the rig was tested. John was tested with a deep nasal swab on April 9.

After being tested, John was told he needed to return home and self-quarantine immediately. He departed from Louisiana and drove to Texas. John wore a mask and gloves when he wasn’t in the car, only stopping for gas on his way home to Kerr County. The health authorities in Louisiana were aware of John’s test and plans to self-quarantine, but those authorities did not alert any agency in Texas.

Upon arrival in Kerr County, John immediately went into self-quarantine at his home. His wife had already made a trip to the grocery store and was waiting for her husband to arrive. At this time, John did not have his test results, but they planned on hunkering down and not leaving home. They slept in different beds, used different bathrooms, and remained isolated as they awaited the test results. Neither has left their home since John returned from the rig.

Test results came on Monday the 13th, and might have been delayed due to the Easter weekend holiday. Because John was still asymptomatic, he expected the results to be negative, but he was surprised to hear that he did, in fact, test positive for COVID-19.

Health authorities were persistent in asking him about symptoms, and of course, John still had none. At least one person he dealt with was interested in knowing his blood type, which is O negative. According to this health care worker, there is some anecdotal chatter that this particular blood type is more likely to present no symptoms when infected with COVID-19. There is still no thorough data to confirm or deny this anecdotal evidence about this blood type.

John asked his doctors several times if there was any chance that the test was wrong. Could it have been a false positive? He was assured that no, this test was indeed accurate. The health authorities told John he needed to continue to self-isolate. Upon receiving the test results, John took it upon himself to contact local and state authorities in Kerr County and Texas to alert them about his positive test result. If he had not volunteered this information to local authorities, it’s unclear whether or not Texas or Kerr County would have been informed at all. John felt it was his duty to report this information to the proper authorities.

He is still asymptomatic. The state health authorities contact him regularly to monitor his condition and to be sure he is still practicing the proper isolation techniques. Based on the contact tracing and testing that has been performed on him and his coworkers, state authorities believe he could be allowed to leave his home again in the near future, but have not specified when exactly that could take place.

John plans on donating plasma when he is able, and wants to be tested for antibodies both to confirm that he actually had the virus, and in hopes that his plasma could be used to help another COVID-19 patient recover from the disease. (Testing is currently underway to find out if “convalescent plasma” can be used to treat the virus.)

Once he has been cleared, John plans on returning to work on the rig. He was highly complimentary of his employer and the steps they took to respond to the presence of the virus on their rig, and also for the steps that are now being taken to prevent any further infections. Work on offshore platforms continues. There are approximately 680 platforms in the gulf region, and patients have tested positive on seven of them, as of April 15.

John says that his company has taken additional steps to prevent any spread of the virus on its rigs. Work schedules have been changed and procedures have been put in place at great expense in hopes of preserving the health of the company’s workers.

John felt it was important that his story be told to calm the nerves of local residents who worried that the third COVID-19 patient in Kerr County might have been “in our midst” spreading the virus while being asymptomatic. That is not the case. John wanted to reiterate that he took every precaution and followed all of the health professionals’ and authorities’ advice to the letter.

While it is scary to see additional cases of COVID-19 appear in our community, we hope that continuing the social distancing practices, and following the mandates from state and local health officials will continue to prevent the spread of the virus within our community. John was completely asymptomatic throughout his ordeal. His experience shows us why social distancing must be practiced whether one has symptoms or not, and why testing is so important to defeat the coronavirus.

We should remember that every patient that is diagnosed with COVID-19 is a human being, with hopes, fears, and challenges similar to those that each of us face every day. Before jumping to conclusions, let’s try to pause and get the facts. Before we accuse, let’s consider how we might react if we receive the news that we have tested positive for a potentially life-threatening illness. And let’s hope we can all react as calmly, and act as rationally, as John did.